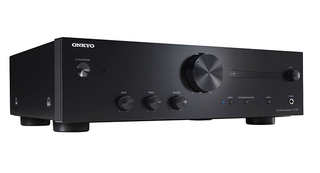 It’s always exciting for us when a What-Hi-Fi? Award-winner gets a new sibling - especially when the winner in question has claimed three consecutive awards, and especially when it’s not only getting one sibling but two.

The two amplifiers have four and five RCA line-level inputs respectively, and an MM phono stage. The A-9130 adds coaxial and optical inputs, fed by a Wolfson WM8718 DAC supporting 24bit/192kHz playback.

In the A-9130, the digital audio board is designed to automatically shut down when an analogue input signal is detected - this is intended to reduce potential signal interference.

Both models have line-level outputs and subwoofer outputs too, with the A-9130 also featuring a direct power-amp input allowing it to hook up to an external pre-amp.

Like the A-9010, the two new amplifiers are based on Onkyo’s high-current WRAT (Wide Range Amplification Technology).

In addition, the A-9110 and A-9130 feature Phase Matching Bass Boost technology (which is designed to align the phase of low and mid frequencies for supposedly richer bass and clearer vocals), as well as Optimum Gain Volume Circuitry, which works to prevent interference from the amps' noise floor.

Last but not least is Direct Mode, which reduces the length of the signal path by bypassing tone control and Phase Matching Bass Boost circuitries.

The new amplifiers’ casework has been upgraded to a 1.6mm-thick metal chassis, designed to improve rigidity and reduce vibrations and resonance. And on its fascia is a screen displaying current input selection.

The Onkyo A-9110 and A-9130 integrated stereo amplifiers will be available in September in either black or silver finishes.