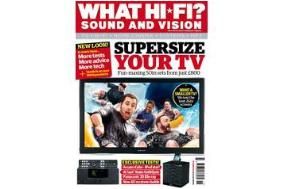 We kick off with a Supertest of 50-52in TVs priced from a remarkably competitive £800. That's a staggering amount of telly for your money. We've given models from LG, Panasonic, Sharp and Samsung a thorough going over.

If it's a smaller screen you're after, we've also got a Group Test of brand-new 26in models, all for less than £300.

And there's a remarkable new 3D-ready TV from Samsung, the LE40C750, which at £1000 is the cheapest 3D TV we've tested to date. We also take a first look at Sony's wirelessly connected Bravia KDL-40NX703 with Freeview HD tuner.

Other home cinema highlights include a Group Test of £800-£1000 home cinema amplifiers, from Denon, Onkyo, Sony and Yamaha, and we've also built an ideal home cinema set-up for music lovers.

Looking for a classy iPod dock to unleash the tunes on your Apple portable? Then check out our test of new luxury iPod docks to challenge the Award-winning B&W Zeppelin. Has B&W's groundbreaking design finally met its match?We pitch it against Arcam's new rCube, the Philips DS9000 and Pioneer NAS5.

For those who like to carry their music and movies in their pockets, there's a roundup of multimedia phones in which the much-hyped iPhone 4 takes on rivals from HTC, Samsung and Dell.

Any portable media player needs a decent set of heapdphones, and to that end we've been putting on-ear cans through their paces in our headphone test.

Our Big Question this month tackles the thorny issue: "Which source is best in 2010 – vinyl, CD or your laptop 'n' DAC?" Three readers decide. And in our Savvy Shopper feature one reader goes in search of a new DAC to replace his Cambridge Audio DacMagic.

If you live in the north of England, join us at the Manchester Home Entertainment Show running over the weekend of October 16th-17th. Visitors will be the first to see our 2010 Award winners in all their glory, and the test team will be on hand to answer all your hi-fi and home cinema queries. Full details in our Manchester Show blog.

Finally, we've got some cracking competition prizes for you this month. There's £5000-worth of top hi-fi and home cinema kit to be won from QVC, and five sets of Monitor Audio BX2AV speaker packages up for grabs, each worth £1100. Head on over to our competition page to enter.

All this and more is packed into the bumper November 2010 issue of What Hi-Fi? Sound and Vision, on sale now. Don't miss it!