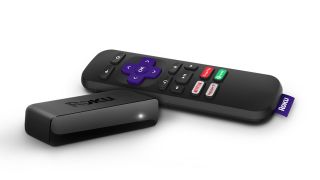 Roku has today refreshed and expanded its video streamer line-up in the UK by introducing a redesigned Roku Express and a brand-new Roku Premiere (pictured above). The two new players sit alongside the flagship Roku Streaming Stick+.

The Roku Express (£30) is the entry-level streamer, offering 1080p/HD streaming in a form factor that’s 10 per cent smaller than its predecessor. Designed to help owners reduce clutter around their TV, it can be powered through a TV’s USB port and features an adhesive strip that allows it to be discreetly attached to the bottom of a TV.

The Roku Premiere (£40), which came to the US market last year, arrives as the cheapest Roku streamer to support 4K and HDR, undercutting the Amazon Fire TV Stick 4K (£50) by a tenner.

The Premiere supports HDR 10 and HLG – so it will be able to stream 4K HDR content from Netflix, Amazon and BBC iPlayer – and unsurprisingly boasts a more powerful processor than the Express to accommodate the streaming of such content.

The Roku Streaming Stick+ remains in the 2019 line-up – and it’s dropped in price by £10, giving it a more competitive price tag of £50. It too supports 4K and HDR but builds on the Premiere’s functionality with more advanced, dual-band wi-fi and a remote that can control a TV and facilitate voice control search.

For the uninitiated, Roku streamers give TVs access to a plethora of free and paid-for services, including Netflix, Now TV, Amazon Prime Video, hayu, UKTV Play and the full suite of UK catch-up TV apps (BBC iPlayer, ITV Hub, All 4 and My5).

That list should include Apple TV+ when the highly anticipated service arrives in the fall, as well as Disney+ when it (eventually) comes to the UK.

The Streaming Stick+ is on sale now, while the new Roku Express and Roku Premiere will be available from early October.

Hisense to launch first Roku TVs in the UK this year

Best Roku TVs – which should you buy?

How to stream the Premier League live for free