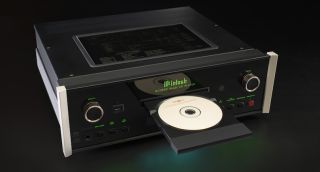 Another month, another McIntosh product (or so it sometimes seems - lately the brand has the output of a candy-cane factory in November). The MCD600 SACD/CD player and MS500 music streamer are the latest additions to the US brand’s portfolio.

In addition to disc playback, the former can also play music via its front-panel USB input, which supports PMC files up to 24bit/192kHz (and upsamples them to 32bit/384kHz) and DSD128. On the connectivity front there are also coaxial and optical inputs and outputs, and a 6.3mm headphone output.

The MCD600 features a volume dial and variable, as well as fixed, balanced and unbalanced outputs, allowing it to take on preamplifier duties and to be connected directly to a power amplifier.

While the MCD600 strictly follows McIntosh’s distinct styling, the front panel features new LED backlighting, while a new glass top has performance specs and a block diagram printed on it.

The Linux-based MS500 music streamer is serves both DLNA playback of files up to 24bit/192kHz, and direct access to (and built-in interfaces for) music streaming services like Spotify, Tidal and Deezer.

Internet radio stations can also be added as presets, and there’s also three USB inputs, any of which can be used to connect a USB drive or a DAC-toting device. Utilising this external DAC, one additional independent audio zone can be created.

Control options are three-fold: via remote control, via web browser or via McIntosh’s free iOS/Android app.

Thanks to a new fan-less processor, and the fact local music and the operating system are both stored on a 500GB solid-state drive (SSD) with no moving parts, the MS500 promises to run quietly.

McIntosh's new amplifier is its smallest yet