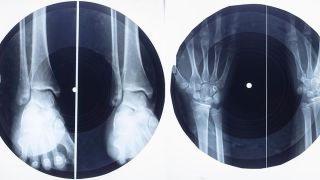 The University of the Underground is collaborating with digital museum Collecteurs and the Bureau of Lost Culture to release a number of recordings on x-ray film “to raise awareness against censorship and encourage plurality of thinking”.

Dubbed roentgenizdat, or ‘bone music’, it was a bootlegging rebellion against the Soviet Union’s severe prohibition of Western music and indeed culture on a greater scale throughout the 1950s and 1960s, particularly jazz and rock ‘n’ roll. Tracks back then included such songs as Rock Around The Clock and Boogie-Woogie Bugle Boy.

More: A history of the weirdest vinyl records ever made

Those recordings were predictably of vastly inferior sonic quality than their vinyl counterparts, and we shouldn’t imagine those x-ray records being released by this initiative will compare to your heavyweight half-speed master.

Nonetheless, that is almost beside the point. So if you’re interested in bidding on one of these musical x-ray films, then you can do so via the official website.

At time of writing, those bid on so far are ranging between $350 and $400, with Massive Attack perhaps unsurprisingly most popular.