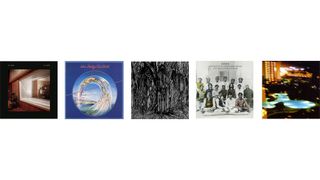 The ubiquity of digital workstations these days means that, using little more than a smartphone and an app, even the least technically gifted can make a crude bedroom recording sound like it was done in a cathedral.

But while the work may have been made easier, nothing quite compares to the real thing – especially when it comes to reverb.

In this list, while far from ignoring those revolutionary pioneers of recorded sound, such as Brian Eno or Joe Meek, we're turning our collective ear to a selection of pieces characterised by their surroundings.

If capturing the setting of a performance is important, these eight examples of sonic innovation should leave even the most rudimentary hi-fi system little room for confusion.

Nils Frahm in a dry well

For innovative German modern-classical composer Frahm, a break in Mallorca developed into a self-imposed busman’s holiday.

“I’m staying in a little old stone house, then all of a sudden I heard a water drop falling with this 80s, digital, Blade Runner reverb. It sounded insanely artificial,” he told Crack magazine.

“I went into the corner of the living room and opened something which looked like a wooden toilet seat and there was this well, inside the house.”

Frahm set up a quasi studio, placing a speaker and microphone inside the well, picking up its natural reverb glazing the music.

Much of the reverb on All Melody, however, was captured in the chambers of Frahm’s Funkhaus workspace in Berlin, a building previously used as a mid-century broadcast studio that the pianist has refurbished in the sonic image of his music.

Listen to All Melody on Spotify

Listen to All Melody on Tidal

Buy All Melody from Amazon

John Martyn by a lake

In his liner notes for Another World (1998), a collection of studio outtakes from the recording of Martyn’s One World, engineer Phil Brown discusses how he and producer Chris Blackwell achieved the original record’s magnificently gaping sound at an idyllic Berkshire farmhouse.

“The house was almost totally surrounded by a flooded disused gravel pit, a large lake with a house in the middle. We hired a PA system and set the monitor stack up on the far side of the stables, pointing out across the lake.

“I used two Neumann U87s on the opposite side of the house, to mike up the outdoor PA sound coming back off the lake. A further two were placed close to the water’s edge, as far away as our leads would allow. These picked up the sound of water lapping, and a distant strangled sound on the guitar which was perfect for lead solos.”

Brown describes how they settled into a routine of working afternoons through to morning, battling damp night air in pursuit of ultimate ambience: “Between 3am and 6am was the toughest time on the mikes, but these quiet hours before dawn created the most magical atmosphere for recording, resulting in two of our classic masters: the title track, One World, and my favourite, Small Hours.”

Listen to One World on Spotify

Listen to One World on Tidal

Buy One World from Amazon

Paul Thomas Anderson documented the recording of this collaboration in his film of the same name, so you can actually follow the album being created at Mehrangarh Fort in Rajasthan, India.

Nigel Godrich’s light-fingered production is essential to the recordings, allowing the sounds of nesting birds and exterior ambient noise to permeate. It was all premeditated, as Johnny Greenwood revealed to Pitchfork when describing his motivation for making the record.

“I guess part of it was wanting to make a record using Indian musicians, but trying to get sounds that weren't overly reverential,” he says. “Lots of Western recordings of Eastern music are done with enormous care and caution – and, usually, absurdly polished production values. No wonder it's sometimes thought of as massage music.

“There's this desperate desire not to offend. Radiohead don't make records like that, so I figured we could record Shye's band with the same broad strokes. And with all those drummers and beaten up old brass instruments, it was like the noise and distortion was already taken care of before we played a note.”

Listen to Junun on Spotify

Listen to Junun on Tidal

Sigur Rós in a swimming pool

Had Sigur Rós gone ahead with their original plan, we could be writing here about a disused NATO tracking base in the Icelandic mountains instead.

But in 1999, having decided against the impracticalities of that location, the avant-rock group opted to convert a disused 1930s swimming pool instead, requiring the roof of the building to be temporarily removed in order to accommodate its mixing desk.

Sundlaugin was opened as a commercial recording facility a decade ago, however, its early life as a studio was spent crafting the luscious reverbs of Sigur Rós, beginning with ().

As well as the space’s evident sonic benefit, its website emphasises as much the location’s power to inspire: “Sundlaugin’s position on the periphery of the Arctic Circle is extra special: awesome volcanic terrains, geysers, glacial rivers, snow-coated forests and, of course, the greatest light show on Earth, the Northern Lights.”

Listen to () on Spotify

Listen to () on Tidal

My Morning Jacket in a grain silo

There’s little novel in My Morning Jacket’s foundation – the organic gathering of friends and family into a band, practising and recording in the home of one of its members is hardly a unique tale. However, the group chose to forge their first three albums, beginning with The Tennessee Fire in 1999, in a very special location indeed.

Assembling the group as an outlet for more ambient work unsuited to his band at the time, Jim James recruited cousin Johnny Quaid as a guitarist, and it was his grandparents’ farm in Shelbyville, Kentucky, that was the setting for MMJ’s early works.

"[It was] a really, really beautiful farm way out in the middle of nowhere and we had a studio in this little apartment above the garage," James told Under The Radar last year. "We were just so green, we didn't really know anything about professional recording, but we did it all ourselves and just had an amazing time out there."

The most distinguishing feature in the production of those first three albums was the recording of James’s vocals in the farm’s disused grain silo – heard sporadically on The Tennessee Fire and throughout At Dawn and It Still Moves. The building created a blanket of natural reverb that feels as though it could stretch the entirety of their home state.

Listen to The Tennessee Fire on Spotify

Listen to The Tennessee Fire on Tidal

Buy The Tennessee Fire from Amazon

Sunn O))) mark somewhat of a departure in this list, in that their choice location for recording the vocals for Báthory Erzsébet in the end deadened the sound.

For the Black One closer, the celebrated drone metal duo enlisted the guttural howls of claustrophobic Xasthur vocalist Malefic - then locked him, with microphone, inside a coffin.

Though perhaps their motivation was more as a means of extricating a terrified, as much as terrifying, performance from the black metal frontman. The aridly dry vocal track cuts through filthy guitar drones like a rusty knife through butter. It’s an unnerving sonic juxtaposition that sits uneasy on the ears, and near drags you into the casket.

Listen to Black One on Spotify

Listen to Black One on Tidal

Buy Black One from Amazon

Jordan De La Sierra, a student of both Terry Riley and Pandit Pran Nath, recorded his 1977 work Gymnosphere: Song of the Rose in a small basement studio in Berkley before playing the tapes at the walls of San Francisco’s Grace Cathedral and capturing the resulting echoes and reverberation. Mixing the two recordings together, the result is an ethereal sonic mist, with notes played very deliberately then manipulated by space.

Speaking with Mike Powell upon the record’s re-release by Numero Group in 2015, the New Age musician detailed both the origin of his composition and its subsequent recording: “First, I needed to find a piano-tuner and a piano I felt comfortable playing on. I was able to get a really fine grand piano into the studio. I had a great piano-tuner who was not only familiar with Western piano tuning techniques in the tempered scale, but he also had been studying Indian music for almost ten years, and knew how to tune to the subtleties of what you would call pure sound. He could get the pitches to be aligned with a fundamental pitch, and make sure that all the harmonics were aligned.

“The tuning that you hear on Song of the Rose was the result of pitches that I had determined that I wanted to use, and the cycles per second that I wanted to use. They would all be harmonically aligned to a fundamental and so every note that’s in the scale – and I only used seven notes – are totally the product of that fundamental pitch. You’ll hear the harmonics coming out in the fundamental. If you just played one note, if you listen to it very, very, very carefully, you can hear all the harmonics of all the notes in that single note.

“Once that was in place, I sat down and began to play the improvisations that I had been developing over a period of years. Stephen Hill had the ability to capture these pitches with his recording equipment and once it was recorded, I put a very slight delay on the signal of the tape. I was playing live. It turned out really cool. When that was done, we mixed the dry signal and the other signal, and then that signal got played in the Grace Cathedral. We wanted to get more reverb so we were looking for a bigger room – a space to let the reflections of sound work – and that was where we chose to do it.”

Listen to Gymnosphere: Song of the Rose on Spotify

Listen to Gymnosphere: Song of the Rose on Tidal

Buy Gymnosphere: Song of the Rose from Amazon

Filmmaker Adrian Maben’s original idea for his Pink Floyd feature was to have the band’s music soundtrack shots of contemporary paintings and sculptures set among surrealist décor; an idea that was politely listened to then rebuffed by David Gilmour and the band’s manager Steven O’Rourke.

Later that year Maben found himself alone at Pompeii while holidaying in Italy with his girlfriend. “I discovered I had lost my passport somewhere in the ruins, possibly in the amphitheatre,” he recalled.

“I rushed back to the gate and tried to explain to the guards what had happened. Surprisingly they let me in and I returned alone, retracing my steps along the empty streets of Pompeii, back to the amphitheatre of stone walls and seats.

“It was strange. A huge deserted amphitheatre filled with echoing insect sounds, flying bats and the disappearing light, which meant that I could hardly see the opposite side of this huge structure built more than two thousand years ago.

“I knew by instinct that this was the place for the film. It had to be here. It somehow all came together that evening in the ancient city.”

The band agreed on the proviso there would be no playback – everything must be recorded live – and a unique concert film, sans audience, was developed. The sonic effect is subtler than with other entries on this list – a by-product of its location rather than tailored for a specific result – but reflects the vastness of this empty gallery.

And for the record, Maben never located his passport.