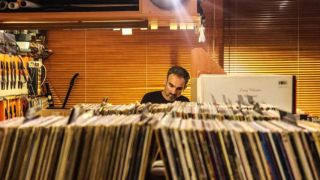 Just as Christmas is a time for family, Record Store Day should be dedicated to your local vinyl merchant.

But that still leaves you with 364 days of the year to travel the world in search of those hidden gems everyone else seems to find but you.

In this list of 25 record stores to visit (ideally) before you die, we have dusty basements, nine-storey ridicuplexes and refurbed prostitution windows in a trip that takes us across the globe.

Get collecting those air miles.

Proudly billed as the oldest record shop in the world, when Spillers Records was founded by Henry Spiller in 1894 it sold phonographs, wax cylinders and shellac discs. Two big moves later, from the Queen's Arcade and then The Hayes, the store is now in its second address within The Morgan Arcade, selling everything from metal to spoken word.

In the words of Gilles Peterson, "in all honesty, it's not a record shop per se, more of a bric-a-brac shop selling everything from sewing machines to car parts, and it's right at the back of a little market". Even if you manage to locate the shop, its wares aren't always in the greatest of nick – but Seriosha serves as a vast-if-disordered catalogue of Cuba's musical history.

Odds are you've found a gem of a store when its proprietor (Jimmy Rugami, in this instance) is dubbed 'Mr Records'. His shop is a treasure-trove of African music, and the only one remaining in Kenya. "Every time I knew somebody is closing down and he has records, I couldn't stop the urge to buy one, including even crossing borders," he says.

Licorice Pie deserves its place on this list for sheer eclecticism. "We stock all sorts" is its shibboleth, and the everything-goes mantra employed by founder David Reitman sees Jerry Lee Lewis living under the same roof as choice Japanese boogie.

The Jacaranda Club has its place in Beatles history, but the aim when re-opening was to be a part of Liverpool's musical future rather than just its legacy. Combining a record store with a bar and live music venue, there are decks built into tables acting as listening booths, and Jacaranda is home to one of the final remaining Voice-O-Graph booths anywhere in the world.

The Flip Side – Dubai, UAE

Opened only last year, The Flip Side is proudly Dubai's only independent record store. While stocking a global selection, The Flip Side champions Arabic music and local labels, and regularly hosts live music.

One Discos Paradiso founder (Gerard Condemines) began selling records in another of the city's stores, La Ruta Natural, while the other (Arnau Farrés) cut his teeth reselling flea-market finds on Discogs. Now they run this haven of electronic music, a genuine hub of the art in Barcelona.

Selling vinyl and cassettes alongside books and collectibles, the main draw of Technical Equipment Supply is its in-house label. With previous releases including works from Aphex Twin and Madlib, its pressings are only available to those who visit the shop in person.

Vinyl is far from in short supply around Berlin, but you'd struggle to match the behemoth Space Hall for scale in any major European city. More than simply its size, impressive too is its scale and variety of genre, leaving specialisations to its many neighbours.

Though shuffled along from its birthplace of Kensington Park Road, this is essentially the first Rough Trade store. Opened as a record shop by Geoff Travis in 1976, it went on to sire the record label that brought us The Smiths, The Libertines and The Strokes. It now has stores in East London, Bristol, Nottingham and New York.

Orange Street, known as Beat Street, was once the beating heart of Jamaica's music industry. Rockers International is the record shop of late reggae legend Augustus Pablo, and where you'll find the finest reggae, ska and rocksteady in its spiritual home.

Once a chain of 17 stores, Discolombia is now down to one - which houses all the stock of its previous shells. It's a crate-digger's dream, with over half-a-century's worth of Latin music to finger through, and is home to label Felito Records.

"Musicians didn't just hang out here, they worked here," says Wuxtry owner Dan Wall. Among them Peter Buck, who – while working at the store – met a university student named Michael Stipe. More than only a mecca for R.E.M. fans, though, Wuxtry is a Georgia institution of more than 40 years' standing.

Housed in a former prostitution window in the heart of Amsterdam's red light district, Red Light Records is a small but well-stocked oddity. Specialising in "obscure vinyl and rare gems", you're as likely to head out with some Bollywood or Japanese synth-pop as you are a latest house cut.

Opened in 2001, adding to stores in Berkeley and San Francisco, the Hollywood branch of Amoeba Music on Sunset Boulevard occupies an entire block and, unsurprisingly, bills itself as the biggest independent record store in the world.

Mabu Vinyl is co-owned, alongside its founder Jacques Vosloo, by Stephen 'Sugar' Segerman. He was at the centre of the acclaimed documentary film Searching For Sugar Man (a journey to find out what happened to American musician Sixto Rodriguez, little known in the USA but hugely influential in apartheid South Africa without even knowing it), making Mabu as much a draw for movie buffs as record collectors.

Casarão do Vinil translates as Big House of Vinyl, and that's precisely what it is. Part of a thriving record store scene in Sao Paulo, it is home to maybe a million records divided by price rather than genre or artist, with not a corner of any room left bare.

Essentially a thrift-store basement filled with of hundreds of thousands of dusty records, The Thing is one man's hell and another man's paradise. Owner Larry Fischer replenishes his stock weekly with whatever collection is going cheap so, though those folkloric first presses have most likely all gone, those willing to work for it may find a one-dollar gem.

Named Pick Of The Pops when it opened in 1964, Chico Records got its current name when a bomb went off during the Lebanese civil war of 1976 and destroyed the sign. Moving to the university district in 2004, it has among the finest collections of Middle Eastern records going anywhere.

Situated in the unoffical home of St Petersburg's alternative art scene, Pushkinskaya 10, Baza is as much a source of DJ and sound equipment as it is vinyl. You're unlikely to find another record store with such inspiring artistic surroundings, however.

Another record store combined with a label, 12 Tónar fast became a haven for Iceland's finest artists such as Björk and Sigur Rós when it opened in 1998. Its offerings are varied, but its classical section in particular has the approval of Gramophone reviewer Andrew Mellor, who wrote about it perhaps being the best in the world.

Established by Kunle Tejuosho in the 1980s, this record, book and art shop, and café, is a one-stop shop for everything to do with African arts – and beyond. "From the busy metropolis of Lagos to the rebellious streets of Rio, the music of the universe rests on our shelves," Tejuosho says of The Jazzhole.

This is the very last Tower Records with its doors still open. Located in Shibuya, Tokyo, the store is spread over nine floors with books sitting alongside the records, a café and space for live music. Tower may very well have saved the best for last.

Opened in 1969, originally stocking folk, jazz and blues music, Gramaphone Records played a significant role in growing house music during the 80s. Remaining a specialist in electronic music, this is your home for crate digging in the birthplace of house.