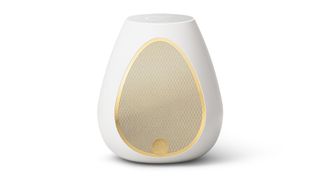 Linn was among the first hi-fi brands to pave the way for music streamers back in 2007, but its priority isn’t always being first. The Glasgow-based company has only just unveiled its first-ever wireless speaker, the Linn Series 3. And it’s very Linn: gorgeous and, at £2950, lavishly priced.

The egg-shaped speaker, which has been sculpted to replicate the top of a wine glass, is based on Linn’s sophisticated streaming platform, giving owners access to networked servers and hi-res services such as Tidal and Qobuz via the Linn control app. It expands on that functionality with Apple AirPlay, Spotify, Roon and Bluetooth, as well as a HDMI ARC socket that allows you to enhance your TV’s sound. It can be voice controlled via an Alexa speaker, too.

An Exakt port allows you to wire a Series 3 speaker to a slightly modified ‘slave’ version (£2450) to make a stereo pair. And multi-room is also an option for those with Series 3s in different rooms.

Present and correct is Linn’s proprietary Exakt technology, which aims to reduce phase errors by intentionally delaying higher frequencies so they arrive at the same time as the lower frequencies, and keeps a music signal’s data in the digital domain for as long as possible to avoid any degradation caused by signal processing.

The Series 3, which is Linn’s first product with plug and play set-up and therefore doesn’t require specialist installation, comes with silver and gold grilles – the latter is exclusive to Harrods, where the speaker is available now before distribution expands to Linn’s other specialists retailers next year.