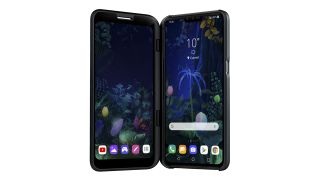 LG has used Mobile World Congress 2019 as the launchpad for its first 5G phone, the V50 ThinQ 5G, as well as its next flagship G Series handset, the G8 ThinQ.

The V50 ThinQ 5G doesn’t only bring support for the next-gen mobile network to the table, but also improvements across the board over its predecessor, the V40 ThinQ.

There’s a 6.4in QHD+ OLED FullVision screen with a 19.5:9 aspect ratio, while on the audio side, aptX HD Bluetooth is joined by support for DTS:X for creating a virtual surround sound effect from either the built-in stereo speakers or a pair of connected headphones.

The 8.3mm-thick, 180g handset is powered by Qualcomm’s latest Snapdragon platform (855), with a new heat-dissipation system that is supposedly more effective than traditional heat pipes in keeping internal temperatures low. The 4000mAh battery is 20 per cent larger than the battery in the V40 ThinQ, too.

While Samsung and Huawei have announced foldable phones with two screens (or one supersized one) for easier multi-tasking and improved video watching, LG is instead offering an enhanced screen experience via an optional ‘Dual Screen’ accessory.

Connecting to the phone via a pogo pin, it is designed to resemble a cover case, giving the V50 ThinQ 5G a second 6.2in OLED display that runs off the phone’s battery and can be positioned in either 104- or 180-degree angles.

The 4G LG G8 ThinQ, meanwhile, is the first G series device from LG to feature an OLED display, sporting a 6.1in QHD+ FullVision screen.

As LG revealed last week, the G7 ThinQ replacement uses Crystal Sound OLED, which repurposes the screen as a diaphragm, vibrating the entire surface to produce sound. That’s boosted by LG’s stereo Boombox speaker, while its ‘tuned in collaboration with Meridian Audio’ sound is augmented by DTS:X and MQA support and a 32-bit Hi-Fi Quad DAC.

The G8 ThinQ also introduces palm recognition technology called Hand ID, which uses LG’s front Z Camera and infrared sensors to recognise the shape and thickness of the veins in the palm of a hand to unlock it.

The Z Camera is responsible for 3D Face Unlock and Air Motion too, the latter allowing owners to perform functions – such as answering the phone or adjusting playback volume – without touching the phone, simply by using hand gestures.

Elsewhere is a 6GB RAM, 128GB storage (which can be expanded by 2TB via a microSD card) and a 3500mAh battery.

LG will also introduce a slight variation on the G8 ThinQ in the coming months. The G8s ThinQ (note the 's') will offer much of its sibling's specification but will come with a slightly larger screen (6.2in) and battery (3550mAh) and sport a more premium finish.