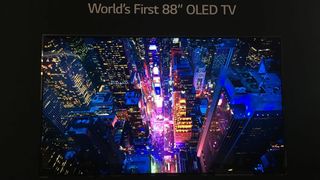 We could see 8K LG OLED TVs come to market in the first half of 2019, according to reports coming out of Seoul.

At a recent trade show, LG Display Vice Chairman Hang Sang said "We plan to begin mass production of 8K OLED panels in May next year".

And, according to a report in Aju Business Daily, another official from the company suggested that LG would attempt to launch its 8K TVs in June.

LG did preview an 88in 8K OLED TV at IFA 2018, but this is the first timescale to be placed on its upcoming high-tech TVs.

Mr Chan did admit, however, there are some potential hurdles to be overcome if 8K TVs are to go mainstream, not least being the lack of content. "At present, there is not much 4K content and upscaling is being done", he said. Consumers are only just getting used to 4K and it's a problem that affects all 8K TV manufacturers, not just LG.

During our review of the 8K Samsung QE85Q900R we noted how spectacular 8K demo footage looked, and the impressive job done by the TV to upscale Blu-rays to 8K resolution. But as is to be expected, it's not up to the upscaling standards of 4K TVs.

LG's 4K OLED TVs have been among the standout performers in the TV market this year, so we're extremely excited to see how the company plans to deal with the jump in resolution.