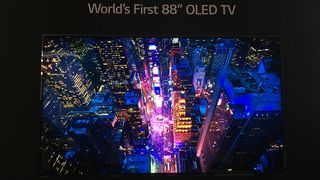 We had our first look at LG's 88in 8K OLED at CES 2018 earlier in the year, but that set was only showing still images. The display at IFA 2018 is now fully functional, showing moving images in 8K (7680 x 4320) resolution and is ready for production.

But you won't see it on sale yet. Despite LG saying its 8K OLED set is ready, it still doesn’t have a price or date for when it will be available. That’s because with the tech still very much in its infancy and no 8K content freely available now, LG says it is waiting for the “right time” before bringing it to the market.

Is it waiting to see how Samsung’s Q900R 8K range fares when that goes on sale mid-October, perhaps?

That’s still four years away, but whether there will be any compatible content by then is more the pressing question.

But 8K isn’t the only next-gen TV tech trend that LG is dabbling in. LG is working towards MicroLED panels in the near future, showcased on a gigantic, searingly bright 173in 4K display (but no HDR) that consists of arrays of microscopic LEDs that form individual pixels and emit their own light.

Rival Samsung caught our attention earlier in the year with its own “The Wall” MicroLED screen – a modular 146in display that can be configured to any size and aspect ratio.

Could MicroLEDs be the next TV technology to overtake the current OLED/QLED battle? It’ll be interesting to see the two Korean giants go head-to-head on yet another TV panel technology.

LG C8 OLED vs Samsung Q9 QLED: which is better?