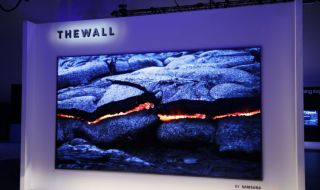 At CES 2018, Samsung unveiled a prototype of an enormous modular display (able to be configured to any size and aspect ratio) that introduced a self-emissive pixel technology the company called MicroLED.

At 146 inches, it isn’t exactly living-room-friendly - but a consumer version of the micro light-emitting diode display is apparently in the pipeline, as reported by The Korean Herald.

In a press conference last week, Han Jong-hee, president of Samsung’s visual display business, talked of a consumer version of The Wall that will be as thin as 30mm – 50mm thinner than the commercial variant. Han said it would be a “luxury” model in the premium home cinema market.

“We have completed the microLED technology and are in a stage to raise production yields,” he said. Like the commercial version, the household variant will maintain the flexible block structure that allows consumers to specifiy any size and aspect ratio.

“Consumers will be able to do anything they want with displays or screens that they feel comfortable with, just like mobile displays,” Han added.

Best TV deals of the month