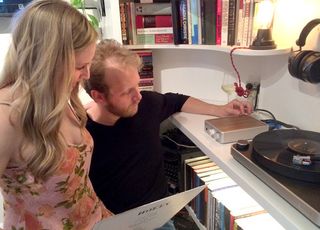 It makes it one of the most impressive Kickstarter campaigns this year, worth around 10 times more than what the company originally set out to achieve.

It's perhaps no surprise that Sprout has proved a resounding crowdfunding success – when it first appeared at this year's Munich High End Show, it certainly turned heads.

Now it seems we can expect to see Sprout – a "simple but high-quality hub of a home music system" – launch for real, later this year after PS Audio achieved its funding target.

It'll boast a 50W stereo power amplifier and inputs including digital coaxial, which will be able to handle any sample rate up to 24-bit/192kHz for high-resolution audio playback.

USB (asynchronous 24-bit/192kHz); analogue 3.5mm and phono inputs also feature as part of Sprout, as does headphone and analogue outputs and Bluetooth connectivity.

Sprout is one of this year's AV Kickstarter successes after surpassing its funding target with relative ease and joining a whole host of other positively-received products.

The crowdfunding community has supported the Geek Out DAC, which we first saw at the Bristol Show, and the "world's first" smart wireless in-ear headphones from Bragi.

And of course, there's the popularity of the PonoMusic service from Neil Young, which we understand is teaming up with Omnifone to deliver its high-res audio catalogue.