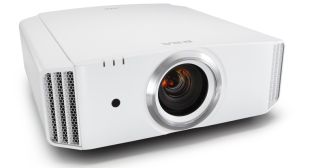 The new JVC projectors are due out in November and promise a step-up on the previous generation X900R, X700R and X500R models, as well as specs to rival anything in their respective price classes.

A new 265-watt lamp and the latest D-ILA chip (JVC's take on LCD technology) help the projectors to deliver what JVC claims is the "highest brightness in class" and "industry leading contrast ratio".

4K content is taken care of thanks to the inclusion of the latest HDCP 2.2 specification as part of the projectors' HDMI inputs. Each model has two HDMI inputs.

Various JVC picture technologies are also on board, including e-shift4 upscaling technology, Motion Enhance to minimise motion blur and Auto Calibration for setting up your picture.

3D accessories remain available as extras for all the projectors.

The new JVC projectors are priced as follows:

All three models are set for release this November and will be officially unveiled at IFA 2015 later this week.