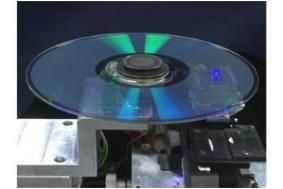 Using no fewer than 16 layers glued together, and each holding 25GB, the disc is able to store about eight times more data than existing dual-layer Blu-ray Disc media, and is said to be fully backwards-compatible with existing players.

The disc, details of which will be announced at the forthcoming International Symposium on Optical Memory and Optical Data Storage 2008 to be held in Hawaii from July 13, is currently a read-only type - just like commercially-pressed Blu-ray Disc titles. However, Pioneer says the technology is also applicable to multilayer recordable discs.

The company has used experience gained in DVD manufacture to solve the problem of getting a clear signal from each recording layer and transmission loss, by altering the disc structure to avoid inter-layer crosstalk.

It has also developed a reading system able to handle weak signals, but maintains that the optical specifications of the reading lens are the same as those used for existing Blu-ray Disc media, so compatibility can be maintained between current and future discs.