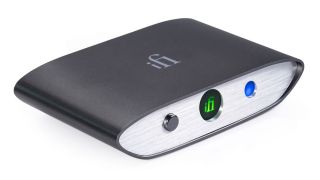 British hi-fi brand iFi is readying a new Zen Series range of compact desktop audio products, the first of which is a Bluetooth receiver designed to plug into a system to gift it offline streaming functionality.

The Zen Blue can connect to any component in need via its RCA (unbalanced), 4.4mm Pentaconn (balanced), optical or coaxial outputs, and impressively supports all the latest, high-quality codecs: Qualcomm’s aptX HD (24-bit/48kHz) and aptX Low Latency, Sony’s LDAC (24-bit/96kHz), Huawei’s HWA (24-bit/96kHz) and the AAC codec preferred by Apple devices. An LED on the aluminium casing’s front panel lights different colours to indicate the Bluetooth codec being received, while another on-unit LED lights up to communicate the sample rate.

The Zen Blue is the first product of its kind to utilise Qualcomm’s QCC5100 processing and digital-to-analogue (DAC) chip, although iFi hasn’t relied solely on this system-on-chip architecture, employing some internal tweakery of its own in order to optimise performance. It has separated the digital and analogue stages, and signals being fed to the latter are not only routed through the QCC5100 but also an additional ESS Sabre DAC chip, which benefits from its own time correction processing. The Zen Blue’s analogue output stage is, unusually at this end of the market, a balanced design, too.

The Bluetooth 5.0-toting Zen Blue will be available from October, priced £129, and will be swiftly joined by an aesthetically matching Zen DAC, which swaps Bluetooth reception for a USB input and adds an integrated headphone amp. We can expect further Zen Series products to arrive in the “coming months”, so be sure to watch this space.

Read all our iFi reviews