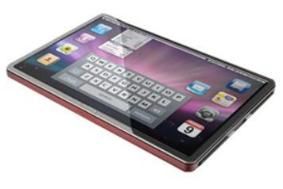 The official Apple press conference kicks off in San Francisco at 6pm GMT tonight, when Steve Jobs is due on stage with his latest pride and joy.

We'll be following events live from the launch here on whathifi.com, and posting regular updates throughout the evening as the story unfolds.

But that's not all. We're also expecting a big announcement from Sky TV at midnight, so make sure you top up on caffeine and join us for what promises to be a very busy evening here on the site's news channel.

For background information on the Apple and Sky stories, see here and here.

The most detailed rumours yet came from US web entrepreneur and blogger Jason Calacanis, who claims to have been given the machine by Apple some ten days ago.

In a succession of posts on Twitter he claimed that:

– The tablet has a built-in HDTV tuner and PVR

– It's running a version of the iPhone OS, and can run several apps simultaneously

– The battery life is "great" in e-book mode, but only 2-3 hours when using Wi-Fi or playing games

– There are also thumbpads on each side, and fingerprint security

– The screen is OLED, and there's a solar pad on the back for recharging

Hey, there's even a grainy picture of the rumoured Apple Tablet. Truth or merely a fine piece of self-publicising (of which Apple would be proud)? Only time will tell...