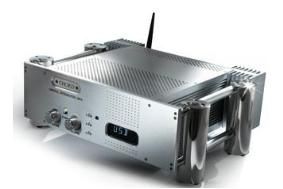 The Cyan Click is a 130W integrated amplifier with wireless connectivity using Bluetooth technology, as well as control via digital and analogue inputs. It's a similar size to Chord's compact QBD76 DAC.

Bluetooth enables users to wirelessly connect A2DP-enabled phones and their PCs to transmit audio files to the amp without any cables.

Chord's Click amp includes its custom designed Bluetooth receiver that extracts and decrypts the digital audio data and then sends this directly into the amp's own digital-to analogue converter. The Bluetooth receiver has a claimed range of 30 metres.

Conventional connections
For those who prefer a more conventional wired connection to the amp, analogue sources can be hooked up using the XLR balanced inputs or RCA phone ins. Both can be used at the same time and are independently switchable.

Digital connectivity is via a BNC coaxial input, optical Toslink or USB. The latter can be connected to a PC, and any music played on the computer will be digitally decoded and converted to a high-quality hi-fi signal for playback.

The price and release date for the Cyan Click have still to be confirmed.

As well as developing the new Cyan Click, Chord's enginers have also upgraded its Red Reference CD player, now in MkII version at £13,000, and developed the new CPM 2800 digital amplifier (£5895).

Changes to the CD player include a lens in the CD dome to give a view of the loaded disc, a re-clocked Philips CD Pro 2 mechanism and 176.4KHz upsampling data transfer.

The CPM 2800 digital amp, like the Cyan Click, has Bluetooth wireless connectivity as well as coaxial, optical and USB digital connections. Power output is 120W per channel into 8 Ohms.

It includes an AV bypass input so the amp can be used in conjunction with an AV processor in a home cinema system, without the need for a separate amplifier.