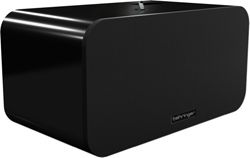 The iNuke Boom weighs over 315kg, stands 4-feet tall and will set you back a not inconsiderable $30,000. And looks utterly crazy.

Due to be on show at the Consumer Electronics Show (CES) in Las Vegas in January, it's the headline-grabbing device in the German company's new Eurosound range.

With four product ranges in total, Home, Live, Portable and Creation, Home and Portable are the two aimed at enthusiasts (rather than music professionals).

There will be iPod docks, wireless speakers, portable speakers and headphones, with the full range set to be unveiled at CES in January.

CES, the biggest consumer electronics show in the world, kicks-off officially on Tuesday January 10th. As official media partners we'll be there to bring you all the news as it breaks, from the sublime to the ridiculous...