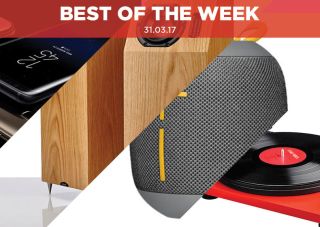 Yamaha has announced a new range of AV receivers, all of which feature support for 4K, HDR and Dolby Vision.

Samsung has revealed its Galaxy S8 and S8+ flagship phones as the company looks to put the Galaxy Note 7 debacle behind it.

The S8+ replaces the Edge models of recent years and both phones come in bigger screen sizes. The S8 is now 5.8in and the S8+ 6.2in.

Contrary to rumours before the launch event, both smartphones include a headphone jack.

Sony has updated its PS4 Pro console to allow it to play 4K files from a USB stick or media server.

Previously, 4K was only available through compatible apps after the console launched without a 4K Blu-ray drive.

The latest update also brings 4K video support to PlayStation VR, though the files will be downsampled to PS VR's 1080p resolution.

Rega's Record Store Day turntable will be signed by Elbow, Noel Gallagher and others

Money! Pink Floyd's The Dark Side of the Moon mixing desk fetches £1.5m at auction

Google Home launches in the UK on 6th April

Samsung ramps up curved TV production, despite Sony and LG killing off theirs

9 highlights from the Headroom Show 2017

Fantastic Beasts and Where to Find Them - Blu-ray review

Watch trailers for the biggest new films coming out in 2017

Audio Technica AT-LP5 vs Sony PS-HX500: which is the best USB turntable?

The best What Hi-Fi? deals of the month - April

The first thing strikes us about the Alphas is how odd looking they are. The second thing is how great they sound.

The angled baffle allows sound to be directed upwards, making for an expansive and spacious presentation.

If you're looking for a great speaker that won't take up much space, there are few better than these.

UE has made great strides with its portable wireless speakers and it's knocked another one out of the park with the Wonderboom.

Small, durable and weatherproof, the Wonderboom offers a satisfying sound and is useful for travelling.

Bass can be a little overstated, but nonetheless this a great little wireless wonder.

For anyone looking to jump on the vinyl revival train, Pro-Ject's Primary offers a solid and easy route.

It's easy to set up and produces a sound that toes the line between being fun and sensible.

For under £200, it's an excellent introduction to the world of vinyl.