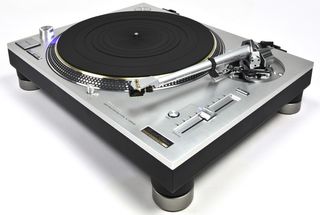 The new Technics SL-1200 turntables have caused quite the stir since they were unveiled at the start of the year.

From the initial high price tag (now confirmed as £2799 in the UK) to the special edition model selling out in Japan in just 30 minutes, it's clear our collective appetite for Technics '1200 decks hasn't abated over the years.

Which is no doubt where this modified and upgraded model from Timestep comes into play. Not content with what Technics has to offer, this modification, called the Timestep EVOke, aims to further improve the sound quality on the Technics SL-1200GAE.

The main upgrades come to the tonearm and the power supply. Designer Dave Cawley is the man behind the upgrades and explains his thoughts as follows: "The standard Technics SL-1200 GAE, while superb, cuts costs in two areas: the tonearm and the power supply. The arm is derived from the SL-1200 MK-IV and while it’s better than some, it’s not what I’d call an audiophile arm.”

The EVOke version instead features a tonearm from SME Audio, an English company that has been making specialist tonearms for more than 50 years. Cawley claims the SME IV tonearm used here "is a match made in heaven” for the Technics deck. Alongside the new tonearm come another modification, the Audio Technica AT-33PTG/II MC cartridge.

The best Technics deck ever made? Timestep would probably say so. Not least as Technics has already told What Hi-Fi? it believes the SL-1200GAE is a huge upgrade on previous '1200 models. For twice the price, the EVOke certainly needs to be pretty impressive...

The Timestep EVOke is available now. It costs £5,764 for the full package or you can buy the upgraded components separately. Find out more on the Timestep website.

As for the new Technics decks, we're still waiting for the UK release...