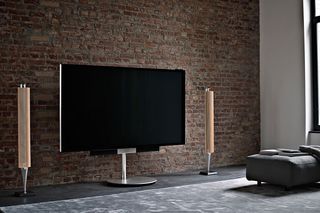 Following the release of the BeoVision Avant 55in 4K TV, B&O has unveiled a larger, 85in model. It is also an Ultra High Definition 4K TV, but features Direct LED technology with 2D local dimming.

As featured on the 55in model, the new 85in version comes with a motorised stand to adjust the angle up to 90 degrees, or alternatively it can be wall-mounted. If on the stand, users can press a button and the TV will move into their favourite position, and automatically select their favourite channel and sound setting. Switch it off, and the speakers will fold back and the TV will return to a more discrete position close up against a wall.

Sound comes via eight integrated drivers: three for treble, three for mid and two for bass, as well as a surround sound module to create a three-channel system with both centre and stereo at the same time. Users can also wirelessly connect to separate B&O speakers to create up to 7.1 surround configurations.

When the TV is installed, B&O will ensure all external devices, such as games consoles and set-top boxes, can be controlled via the BeoVision One remote control, an aluminium remote with one-touch access and personalised 'MyButtons'. A BeoRemote app is available for iPad and Android tablets too.

The BeoVision Avant 85 is available now from B&O stores for £16,595. The motorised stand is sold separately for approximately £1500.

We hope to see a demo of the new B&O BeoVision Avant 85 later on today at the CEDIA Expo 2014 in Denver where it is expected to have its official US launch.