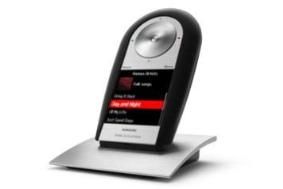 It also means the end of projects such as the B&O/Samsung mobile phone, the Serenata (pictured): President and CEO Karl Kristian Hvidt Nielsen says the company will no longer be involved in the development of mobile phones or co-branded products.

Also under the axe are standalone products such as the DVD2 and HDR2 hard-disk recorders.

Nielsen says that “We will focus on further developing the core audio and video product portfolio which has made the company what it is today. We will, however, also focus on the development of bespoke audio systems for performance cars, which in recent years have contributed to strengthening the global competitiveness of the Bang & Olufsen brand.

A renewed emphasis on R&D will also see the company developing its BeoLiving concept to give greater integration of sound, vision, lights, air-conditioning and security systems, Nielsen saying that “We already offer customers a unique one-remote concept which we need to develop and refine further to achieve complete home integration."

Work will also be done to better serve the 1200+ retail outlets the company has worldwide, and concentrate on markets seen as having potential for high growth: “In the next one to two years, we aim to more than double the number of Bang & Olufsen stores in growth markets such as Russia and China.

"At the same time, we are sticking to an aggressive growth strategy for other expanding markets. It is only common sense that a global corporation like Bang & Olufsen should focus its resources on emerging markets and on opening new stores in these markets,” Nielsen said.

He added that "“We want to raise the bar to ensure that all customers who come to our stores are treated to a professional and memorable experience focusing on the highest possible quality picture and sound."

Cost reductions of DKK160m (around £16.5m), aimed at bringing the company back into the black, will see 300 jobs being lost, the company planning to make 165 of its 2500 staff redundant, and lose the rest "by attrition".

But Bang & Olufsen is still innovating, with a launch planned within the next few weeks of what Nielsen describes as "a classic in the making."

The company says the new product, to be launched in Copenhagen on November 11, "combines traditional Bang & Olufsen values such as superb sound quality, understated beauty and real craftsmanship with leading edge digital technology which is increasingly integrated into the company's products."

Or as Nielsen put it, "I am confident that this product is utterly unique and unlike anything seen before.”

We're booked in for the launch event - watch this space for more news.