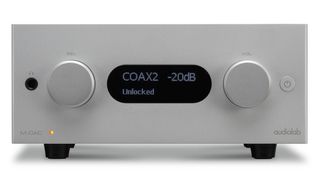 The M-DAC+ (£800) is being touted as a significantly upgraded version of the standard M-DAC, itself a former What Hi-Fi? Award-winner.

Available in silver or black, the new model is based on the same 32-bit ESS Sabre chipset as the original, but there's been a number of major upgrades and design tweaks. These include DSD and 32-bit/384kHz support over USB, and up to 24-bit/192kHz support over its coaxial and optical inputs.

You're provided with the same seven filter settings but the new model gets four additional filters specifically for DSD playback.

The eagle-eyed will also have spotted a new look, which includes a rounded OLED display, dual rotary control set-up and a redesigned remote.

The power supply is now built into the chassis, which helps account for the larger casework, while the M-DAC+ is armed with additional inputs, including an AES/EBU socket and type A USB input - the latter can be used to connect Apple devices.

The M-DAC+ won't replace the existing M-DAC, but will sit alongside it as part of an extended line-up. If you want to catch a glimpse of Audiolab's latest piece of kit in the wild, the M-DAC+ will have its first UK outing at the Headroom show, 29th-30th January at Metropolis Studios, London.