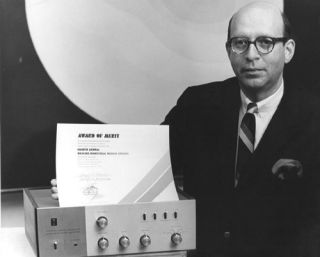 An early career as a radio actor doesn't seem the most obvious start for a speaker designer and the future boss of one of the world's biggest audio companies, but that was exactly the path taken by Arnold Wolf (above), who died last week at the age of 85.

In the 1950s he designed one of the most celebrated of JBL's speakers, the massive Paragon (below), and in the 1970s one of its best-selling, the L100 'Century'.

From radio actor to band producer to designer

Along the way Wolf had his own industrial design company, worked at the RKO film studio, produce a weekly national radio programme for the US Air Force Band, and was also responsible for the famous logo design JBL uses to the day.

He also oversaw the successful translation of an acclaimed studio monitor into what was the biggest selling domestic loudspeaker design of the 1970s, not to mention pioneering the use of foam – available in a particularly striking orange – as a grille material.

Born in San Francisco in 1927, Arnold Wolf moved with his family to New York in the early 30s, and while still a student appeared in radio shows as an actor in 1942-3.

After his family moved back to the West Coast, he worked as a draftsman and sketch artist at RKO Pictures, did military service in the Air Force, where he ran that weekly radio show, and after the war taught theatre arts in Berkeley, California.

In 1957 he founded his own industrial design company, Arnold Wolf Associates, also in Berkeley; one of the company's most prominent clients was Los Angeles-based James B Lansing Sound, for which Wolf's company designed some of its most celebrated designs.

None is more famous than the sideboard-sized JBL Ranger Paragon, launched in 1957, though Wolf's first commission for JBL had been the table-top D42020 'Bel-Aire' (above) – to say the least an unusual-looking speaker, and not exactly what customers were expecting from a company best-known for hefty floor standing designs.

Not that the Paragon was exactly a normal speaker: originally pitched to JBL by Col. Richard Ranger, whose background was in movie sound, it was a stereo speaker system with both channels in a single enclosure.

As if that wasn't enough, it used a concealed bass section, with midrange horns firing at an angle across a large curved panel, which reflected the sound, giving a consistent stereo effect almost regardless of where the listener sat relative to the midpoint of the device.

Trouble is, the Ranger prototype was a monster: nearly 9ft (2.75m) wide, finished in black Micarta (an early plastic/fabric laminate), and all sharp angles apart from that reflector panel, it was hardly domestically acceptable.

Wolf started work on the design in early 1957, coming up with new drawings, and then a scale-model of the speaker he showed the JBL bosses: in fact, rather than present them with blueprints, he simply took in the model in his Gladstone bag, and JBL's then boss Bill Thomas immediately signed it off for production.

Things moved fast, and the speaker was in production by the end of 1957. Wolf had redesigned it as a three-piece design, making it possible for dealers to ship it more easily and assemble it in the customer's home with nothing more than simple tools – an earlier version of the design had been a bare-bones 'shell' into which retailers could spec drivers according to the customer's needs, but this was dropped as being too complex.

The finished version had 95dB/w/m sensitivity, 8ohm impedance and 120-degree dispersion, and being designed to be used with amps of up to 200Wpc.

And the Paragon had become much more furniture-like, if hardly more compact: the production version was 106in (2.69m) wide and stood 86cm tall, not to mention weighing well over 300kg. It sold at prices from $1830 (at that time £650), which would today be the equivalent of just over $15,000, and was available in a choice of real wood finishes.

Not only was the Paragon an instant JBL icon, it would remain so for several decades, and in still a highly collectible vintage audio piece, with prices sometimes approaching $20,000.

On the back of the Paragon's success, Wolf worked with JBL in its move into electronics to complement its speaker range (he's seen at the top of this piece with one of his award-winning designs), and in 1968 he was commissioned to design a new company logo.

The new design emphasised the JBL name, and it's this logo the company uses to the present.

On his retirement in 1969, then-JBL owner Bill Thomas decided to liquidate his assets, and the company was bought by Sydney Harman's Jervis Corporation, which would eventually become Harman International, still the owner of JBL.

Wolf was still presenting product designs to the company's new owners, and eventually he was asked to become its president. After some deliberation, and a long think during a family vacation, he took up the position late that year.

In the 1970s, another iconic Wolf design, the JBL L100, took shape, as the company looked for a way to move its successful studio monitoring line into the home.

Based on the 4310 monitor, the speaker used a three-way driver array, simplifying the design by rmoving the raised 'racetrack' baffle moulding on which the 4310's tweeter and midrance driver were mounted, and the front-mounted crossover attentuator controls.

However Wolf wasn't happy with the grille cloth proposed for the new speaker, thinking it made the design look too anonymous.

Beyond the boring bookshelf speaker

In a view still relevant today, he said 'The problem with bookshelf designs is that, in most home settings, the only effective visual element is the front grille. A panel of stretched cloth, however attractive by itself, does not communicate anything distinctive between one loudspeaker or another.'

The solution was a moulded foam cover, based on the material Wolf had seen used as microphone covers, and moulded into a 'waffle' pattern of squares. Still looked a bit boring, though, in the formulations strong enough to be used; meanwhile the self-coloured versions were too weak and dull, and the material didn't take well to being dyed.

Eventually the manufacturing division came up with a prosaic solution: paint the foam.

With carefully controlled viscosity, a coating was found able to be sprayed onto the grilles without blocking the pores in the material.

So the L100 – quickly named 'The Century' after its model number – appeared at the 1970 summer CES in Chicago, with grilles available in black, blue and very 1970s orange. It went on to be acknowledged as the best-selling speaker of that decade.

Wolf left JBL in 1980, but maintained his design practice – which had been run by an associate during his JBL years – until 1987. A founding member and fellow of the Industrial Designers Society of America, he received many awards for his work over his extensive career.

He's survived by a daughter and two sons.