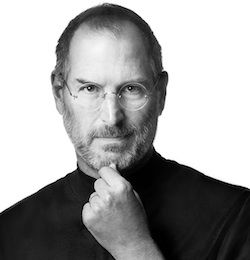 Today's the first anniversary of the death of Apple co-founder and figurehead Steve Jobs.

He died on October 5, 2011, after a long – and very public, thanks to the rapt attention of Apple fans and commentators – battle with illness.

In 2004 he had announced he was being treated for pancreatic cancer, the beginning of a period during which he took several absences from the company, each one accompanied by massive media speculation about the state of his health.

He finally retired as chief executive in August last year, saying that 'I have always said if there ever came a day when I could no longer meet my duties and expectations as Apple’s CEO, I would be the first to let you know.

'Unfortunately, that day has come.'

He urged the board that it should 'execute our succession plan', and in accordance with this Jobs became chairman of the company and handed over the reins to then chief operating officer Tim Cook.

On October 4th, saying 'I love Apple', Cook took to the stage at Apple's WorldWide Developer Conference to launch the iPhone 4S, confirm details of its updated operating system, iOS 5, and confirm plans to roll out its iCloud storage service beyond its launch market in the States.

The next day, Apple's website carried the announcement that Jobs had died.

It's estimated that up to 10% of all internet, TV and radio content published in the period following the announcement concerned Jobs and Apple.

We got to know a lot about 'The Steve Jobs Nobody Knew', as Rolling Stone's cover put it, while the media also thrummed with features about his legacy, the future of Apple after Jobs and – well, who was this Tim Cook guy anyway?

Just a couple of weeks after he'd announced the iPhone 4S, and less than two months after becoming CEO, Cook was leading a celebration of the company's co-founder's life at Apple HQ (above), under the gaze of building-sized portraits, and to the sound of Jobs favourites Norah Jones and Coldplay.

So where's Apple now, twelve months on from the death of Steve Jobs?

Well, it's much richer: the company's share value has rocketed by almost 80% in the past twelve months, standing at over $671 a share and meaning the company's now worth almost $630bn.

OK, that's down a bit from the near $705 per share peak it hit last month, but that still makes it bigger than the value of the gold held by the New York Federal Reserve Bank – only worth about half of Apple –, worth more than Switzerland's 2011 Gross Domestic Product, and twice as valuable as the entire (very wealthy) economy of Singapore.

It's predicted that Apple's revenues for this year will be around $156bn, a useful $47bn greater than was being forecast at the beginning of the year. To put that into context, very few technology companies get anywhere near revenues of $47bn in a single year – for Apple it's the icing on the cake.

So what's Apple actually done since Jobs? Well, it launched the new iPad earlier this year, and has just rolled out the iPhone 5, both slavered over by the Apple fans but now increasingly under threat from other companies' aspirations in the smartphone and tablet markets.

Apple trumpeted that it had taken orders for 2m iPhone 5s in the 24 hours after its announcement, and a total of 5m so far, but Samsung continues to show Apple a clean pair of heels when it comes to smartphone sales, its Galaxy S and Galaxy S II models together having sold well over 50m units.

In the run-up to the launch of the iPhone 5 Samsung had 48% of the smartphone market in major European countries, while Apple sales fell 4.8%.

In the second quarter of this year, Android phones sold just under 105m units worldwide, giving them 68.1% market share, while Apple sold 36m for a 16.9% share. OK, so now it's expected Apple will bounce back, but it's some lead to make up.

Meanwhile the ongoing legal wars between Apple and Samsung are doing neither party many favours, but are arguably damaging Apple more in terms of public perception: what was once seen as the cool counterculture alternative to Microsoft-based PCs is now looking more and more like the combative, litigious face of big business.

But then Apple has recently overtaken Microsoft to become the biggest company in US corporate history, so what do you expect?

Then there's the Apple Maps fiasco, Apple dropping Google Maps from iOS 6 and replacing it with an under-developed, unfinished and frankly hilariously wonky alternative built in-house from a mixture of TomTom data (for the US, where it almost sort of works) and an patchwork of other mapping information elsewhere in the world, where it often gets so bad it'd be funny if it wasn't so sad.

Oh alright then, it's funny. Very funny – especially when it does something as comical as inadvertantly intervening in the Japan/China dispute over a clutch of islands in the China Sea by giving them a set each!

This has brought about another Apple almost-first – the official apology. When people bought a previous generation of iPhone and found it was a bit tricky to make calls on it, the bullish response from Apple HQ was along the lines of 'You're holding it wrong, and blocking the antenna.'

This time, we get Cook (left) saying sorry: in a statement on Apple's website, he says 'With the launch of our new Maps last week, we fell short on this commitment.

'We are extremely sorry for the frustration this has caused our customers and we are doing everything we can to make Maps better.'

And there are also concerns among many about the implications of the new 'Lightning' connector rolled out with the iPhone 5, its nine dynamically-assigned pins replacing the long-running dock connector seen in all Apple portable products for many years.

Apple is saying it's 'all-digital', and describing it no longer as a 'dock connector' but as a 'port'.

Does this mean it won't work in aftermarket products? Will the forthcoming Lightning adapter really let your new iPhone work with your existing iPod dock speakers? Is that an authentication chip in the connector, and will that mean it'll only connect to Apple devices, or those whose manufacturers have paid a hefty fee to Apple for approved status?

Is this Apple tightening the grip on its faithful, and ensuring they toe the party company line? Or a sound business move to defeat those trying to cash in on its success with unauthorised accessories?

Whatever, such considerations are fairly small beer to those inevitable commentators and Apple-watchers, some of whom have even greater concerns about the company beyond it getting all 'big brother' with its customers.

After all, neither the new iPad nor the iPhone 5 was the kind of revolutionary product on which Apple built its business – neither was as revolutionary as the original iPod (left) or iPhone.

The same but slimmer

The new iPad was like an old iPad, but a bit slimmer and lighter, and with a better display, while the iPhone 5 does little more than the 'slimmer and lighter' trick all over, plus adding a bit more screen space for another line of home page icons.

Even the much-rumoured – yes, again – iPad Mini, rumoured to be launched midway through this month, is unlikely, unless Apple pulls something really spectacular out of its hat, to be much more than an iPad again, albeit in a smaller form factor.

And unless Apple is very, very smart with its market-positioing, iPad Minis running VOIP software such as Skype could start to eat into sales of the iPhone. Or, if the iPad Mini is priced too high, might not consumers decide they might as well have an iPhone?

Or a Samsung Galaxy S II? Or an S III? Or a Galaxy S3 Mini – again said to be announced this month, with a launch event invitation setting the date a week ahead of the next expected Apple launch – ?

What Apple needs now is the hardware equivalent of the 'killer app' (which Apple Maps certainly wasn't): a revolutionary device able to turn the world upside down, shift paradigms, push envelopes, leverage intellectual property and all that marketing stuff.

Again the talk is of the Apple HDTV, iTV, Apple TV – whatever the speculation is this week that the product would be called. It was a long-term ambition of Jobs: a TV set complete with the company's technology built-in, able to take on not only the existing giants of television manufacturing, but also allow Apple to do to the global broadcasting industry what iTunes did for (or to, depending on your point of view) the music business.

Those who get excited by the prospect drool over the potential of a hi-tech TV designed by Apple's style guru Jonathan Ive (right), and predict it could be the moment when Apple moves from ruling the consumer electronics industry to – well, what? Master of the universe?

And if you read between the lines, such a thing could be very possible: long-term Apple contract manufacturer Foxconn has just announced plans to sell its own 60in LCD TV, packed with 'smart' functionality and with panels made in the Sharp factory at Sakai, Japan, in which it now holds a majority stake.

Judging from the £850 or so at which it's offering the TV to its employees as a bit of revenue-earning beta-testing, it could be very competitively priced when it moves from its initial markets in China and Taiwan and on to global availability.

However, it's hard not to look at the plight of the existing players in the global TV market – Panasonic and Sony struggling, Sharp all but looking for a way out and the likes of Toshiba now outsourcing all its TV production - and wonder just how much of an opening there would be for an Apple-priced premium TV, however sexy it may be.

Has Apple missed the TV boat?

Just about every manufacturer has TVs with 'smart' features, including audio and video streaming, built-in, but most of the action in TVs these days is at the lower end of the market, with those customers buying TVs looking for maximum bang for their buck.

A £1000 or so Foxconn-made 60in TV may win over such buyers, but one carrying a more Apple-friendly price tag of two or three times as much probably won't.

And I'm not sure Apple could rely on buyers of a TV queuing up outside one of its 250 Apple stores a little over a year later to make the same purchase all over again.

Mind you, if the company could pull off such a product – a TV as revolutionary for viewing at home as the original iPod was for the way millions would go on to listen to music or watch videos on the move – then the legacy of Steve Jobs would be seen to be in pretty safe hands...