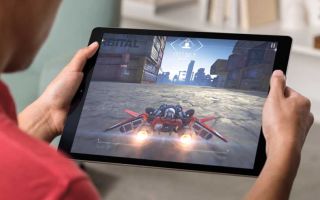 The tablet is powered by a brand new 64-bit A9X chip, which Apple is claiming to be 1.8 times faster than the A8X chip found in the current iPad Air 2.

Apple says technology in the new backlit LED display allows for better contrast and off-axis performance, and Apple's 'refined' Multi-Touch technology - but not the 3D Touch seen on the new iPhones.

The Pro's screen also features a variable refresh rate, which allows the tablet to alter power consumption based on what's being shown.

Besides the Pro's large screen, Apple has given the tablet four internal speakers - as opposed to two found in the iPad Air 2 - promising "clear and rich stereo sound".

There's a speaker located in each corner of the tablet and Apple claims they can automatically adjust frequency depending on how the iPad Pro is being held.

The new super-size iPad will have the latest iOS 9 software on board, plus new multitasking features and a number of redesigned apps, such as Notes, Maps and News.

The iPad Pro battery life is a claimed 10 hours and the Pro comes in silver, gold and space grey.

All three versions will go on sale in November with UK pricing still to be confirmed.

Also announced were a couple of accessories: Apple Pencil and Smart Keyboard.

The Apple Pencil is effectively a stylus for the iPad Pro, promising "incredible accuracy for activities like fine art illustration and detailed 3D design".

The Smart Keyboard is a full-size keyboard which connects via a new connector port - no Bluetooth pairing - and is foldable and doubles as a Smart Cover. A bit like the Microsoft Surface, dare we suggest.

There were also changes to the iPad family, with a new iPad mini 4 quietly revealed in place fo the mini 3, plus a price drop for the iPad mini 2.

Apple claims the new iPad mini 4 is eighteen percent thinner than the outgoing model and that its 2nd gen, 64-bit A8 processor is quicker and more powerful.

The mini's iSight camera has an improved sensor, while the front-facing FaceTime HD camera has been redesigned too.