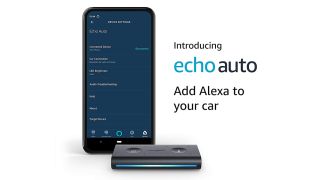 Amazon has finally launched its in-car Alexa device in the UK and Republic of Ireland, following its debut in the US in September 2018.

The Amazon Echo Auto (£50) is the first (and only) Alexa device designed for use on the road, with eight microphones and far-field technology allowing the user to talk to Alexa over music, aircon and road noise.

As anyone familiar with the Alexa voice control ecosystem will have guessed, the in-car device allows the driver or passenger to play music, check the news, make calls, check their calendar and more – all hands-free, simply by using their voice. Simply say "Alexa" and, after that hallmark chime, you can utter your command.

The Echo Auto is powered by a car's 12V cigarette lighter or integrated USB port and can connect to its stereo system through a 3.5 mm audio jack or Bluetooth. It essentially connects to your phone's Alexa app and uses its network data, so regular users will need a generous data plan.

In line with other Echo devices, a button for muting the microphones sits on top of the device, which is slim and compact in form (85mm x 47mm) and designed to fix to a car's air vent with the included mount.

The Echo Auto supports phones powered by Android 6.0 and iOS 12 or later, however, there are some exceptions. Amazon has listed phones and cars not supported by Echo Auto. It also states that the device "works best on cars that do not have Apple CarPlay or Android Auto".

The Amazon Echo Auto is available from Amazon, with stock at Argos, Curry's and Very to follow imminently.

Looking to start or expand an Echo smart speaker set-up? Now's a good time to do so: Amazon is offering savings of up to 50 per cent on several Alexa devices for one week only.