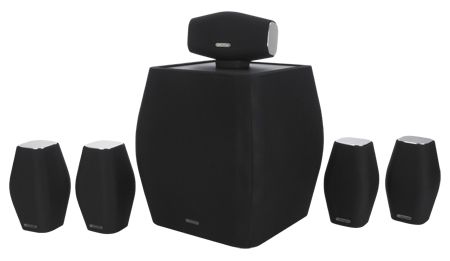 Best style package £600-£1000, Awards 2012. An excellent system with stacks of detail, which now just falls short of the best

Monitor Audio’s no stranger to producing great-quality speaker packages for home cinema systems. Combining style and great sonic performance is always difficult, but Monitor Audio has given it its best shot.

The top-end Monitor Audio Apex and RX6 AV12 speaker packages have been Award-winners for two successive years, and it seems that the company's keen to increase its Awards haul with this new MASS satellite package.

The system consists of two pairs of MASS 10 satellite speakers – one pair for the front left/right channels and the other pair for the rear surround channels – and an identical centre channel speaker.

The satellites are compact, but solidly made and feel weighty in the hand. The cabinets are covered in a black cloth finish, with a glossy black panel along the back, and either end is fitted with silver-brushed aluminium caps.

While we’re rather divided in the office about the system’s aesthetic appeal, there’s no denying that the overall effect is quite subtle. The curved construction of the speakers isn’t just a style point – it also reduces the standing wave effect inside the cabinet for a cleaner, less resonant sound.

For further sound refinement, the horizontal centre speaker sits on a curved rubber coaster to reduce any vibrations from the shelf or table it sits on.

Next to these diminutive satellites, the W200 subwoofer appears rather large. It’s similarly styled with a black cloth finish to match the satellites, but has a wider/squatter construction.

It’s a solid and hefty sub, with twin 25cm side-firing drivers in an active/passive configuration, and powered by a substantial 220W of Class D amplification.

The satellites’ 25mm tweeter and 10cm mid/bass driver are made from Monitor Audio’s C-CAM (Ceramic-Coated Aluminium/Magnesium) cone material, celebrated for its light yet rigid construction.

The mid/bass driver takes design cues from the Award-winning Apex system by being bolted to the back of the cabinet. This has the twin effect of cross-bracing to ensure the rigidity of the cabinet, while also removing the need for any front fixings.

We can’t think of anything better than playing JJ Abram’s Star Trek to put this home cinema system to the test, with Michael Giacchino’s excellent score being a serious challenge for even the most high-end set-up.

For such petite speakers, they’re certainly capable of filling a decent-sized room; our testing rooms were engulfed in seamless, controlled soaring dynamics.

It’s not just the magnitude of the sound, but also the amount of detail it’s able to convey that really impressed us. The gradual build-up of anticipation before the USS Enterprise’s first outing is stunning, and there’s a sense of grandeur that delivers the epic score to its full effect.

That said, newer rivals such as the Q Acoustics Q7000i and KEF E305 deliver an even larger sound.

Sound effects are easy to locate in the expansive soundfield, and the system is skilled at handling quieter moments as well.

When it comes to big explosions, epic space battles and that brilliant warp-speed sound effect, the MASS system takes everything in its stride with a great deal of enthusiasm.

There’s plenty of space for higher notes to reach their full potential, while that punchy and well-timed subwoofer maintains the rumbling hum of the Enterprise’s engines without being too obvious.

It does creditably well with stereo music as well: play Amy Winehouse’s Back to Black album and her deep raspy vocals are full of soulful character, while the MASS system’s agile timing keeps the songs’ rhythms in check.

There’s a slight bias to the midrange, with the centre speaker feeling a bit forward compared to its flanking speakers. This is no bad thing: the already-expressive and clear vocals are direct and engaging. While there are speaker packages with a more seamless integration across the front channels, we haven’t heard anything better at this price.

The speaker terminals are tucked away under the aluminium end cap at the rear of the speakers (above), which gives them a neat look. They also maintain their sonic composure even when placed close to the wall, so feel free to wall-mount them: wall brackets are available for £25 per pair. Alternatively, you can place the satellites on dedicated, pre-wired stands, which are £125 a pair.

When we first heard this system, we were blown away by the power and scale such small speakers were capable of. They still impress with a sound that is much bigger than their physical size would suggest, but they now have competition that sounds larger. The Q Acoustics Q7000i or the KEF E305 pip them in that respect.

At £800 this is stil a great package that won't break the bank. Spend £100 more, though, and you can get more for your money from some of this year's newcomers.

Still, the MASS remains one of our favourite systems at this price. While it now drops a star from the full five, it is still a definite contender for your audition list.