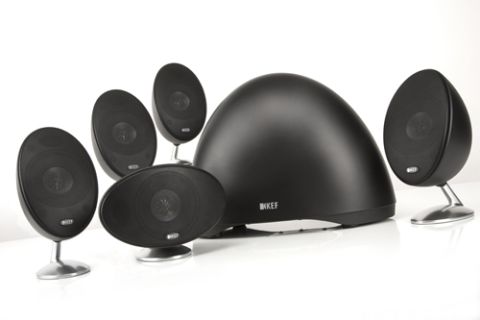 A flexible, room-filling system, but there are packages out there that tell you more

Once upon a time KEF would have had a real moan about us referring to its dinky satellite speakers as ‘eggs’ – but for the new KEF E305 speakers that nickname seems to have become pretty much official. It almost makes us want to come up with a new moniker.

The new E305 system has been a long time coming – the KHT3005 system launched way back in 2006 – so it’s little surprise that it’s quite a technological step-up from its predecessors.

The big news for KEF fans is the inclusion of a brand new Uni-Q driver that’s derived from the one used in the impressive KEF Q300 bookshelf speakers.

KEF lists no fewer than eight headline features of this new driver which, combined with a new crossover and low diffraction, anti-vibration cabinet inspired by the work done on the £20,000 KEF Blade speakers, is designed to make the satellites sound sweeter than ever.

And we’d be remiss if we didn’t mention that subtle styling changes have made the E305 compact speakers look far more contemporarily stylish. The open-bottomed, pivoting base also makes them very easy to wire up and position, even on a wall.

It’s actually the subwoofer that’s most visibly different from before. The old Polo-shaped design makes way for a completely closed, compact, dome-like unit with a downward-firing 18cm driver. KEF’s claim is that the subwoofer is audibly invisible in the surround field – but first you’ve got to set the system up.

KEF’s recommendation is that you simply set the levels to 0dB, set the speakers to ‘small’ and set the crossover to 90Hz. While that will get a certain level of performance from the E305 system, we’d recommend using your home cinema amp’s auto-calibration as the first step, then manually adjust speaker size and crossover if necessary.

Subwoofer placement also takes a little thought. There’s a switch underneath with three settings – cut, flat and boost – and for us setting it to ‘cut’ and placing the sub close to a wall resulted in the best bass integration.

Every room’s different so it’s worth experimenting when you get the KEF E305 speakers home, but we suspect that will be the most effective arrangement for the vast majority of people.

Get it right and bass integration really is a massive strength of the E305 system. True to KEF’s aim, the subwoofer dissipates bass into the entire surround field and blends in so seamlessly that it’s impossible to hear where the satellites end and the subwoofer begins.

That’s obviously a great deal to do with careful tonal matching, but it’s also helped enormously by the agile and tuneful nature of the subwoofer.

It seems as though KEF has taken a lesson from the B&W MT-50 system here, and boy has it paid off, especially when it comes to music – play U2 360º At The Rose Bowl and the bass line bounces along with rhythmic and tonal precision, rather than simply booming disjointed at the bottom, as it can when played through lesser systems.

True, it’s not got the outright bass extension of some, which means movie explosions aren’t absolutely massive, but we’ll take integration and agility over that any day.

And sticking to the theme of integration, the way the E305 satellites disperse sound makes for a thoroughly seamless, enveloping surround field. Play the sewer scene from The Amazing Spiderman and the running water fills every corner of the room, then as Spidey’s clever web system begins to vibrate to the tune of hundreds of little lizards, it does so from all angles in a terrifically effective way.

This isn’t so much about pinpoint placement of effects as it is about the speakers taking themselves out of the equation so that you get fully immersed in the surround soundtrack, and it works an absolute treat.

That’s not to say effects aren’t, um, effective, as they are, and voices are projected clearly and with real body and richness, it’s just that overall immersion comes before any individual elements.

Of course, comparison with B&W’s brilliant MT-50 package is natural, and it’s striking how different the approach is from the two seemingly similar systems. The B&W’s punch and precision highlight a slight reticence from the KEFs that mean action scenes don’t quite have the oomph and attack that you might hope for – when The Lizard attacks it’s with less force than the MT-50 gives you.

On the other hand the E305 surround field is significantly more expansive and immersive, and in many ways it does a better job of transporting you to the sewers of New York – and you know you’ve always wanted to go there.

Another big plus point in favour of the KEF E305 system is that they’re exceptionally easy to system match. The treble might lack a smidge of sparkle, but it gives the system an easygoing personality that will play nicely with almost any electronics in almost any room. The B&W MT-50s, on the other hand, can be pushed into brightness if you’re not just a little bit careful.

There is one fairly big flaw in the E305, though, and that’s that it needs to be played at quite high volumes to sound its best. Reduce the levels just a bit and you quickly lose dynamism and punch, and that can make everyday listening a slightly flat experience.

It’s not that you have to play them at ear-splitting volume to get that back, but it’s worth remembering that if you have to keep it low for fear of waking slumbering offspring, you’re going to lose a fair bit of drama from your movies, music and games.

That will be a bigger issue for some people than it will for others, and some will prefer the more attacking and detailed delivery of the B&W MT-50 system.

There are arguably more precise and focused packages available, with something like the new Q Acoustics Q7000i offering a slightly more expressive and transparent performance than that on offer from the E305.

The KEF E305 remains a thoroughly likeable package, with a reasonable price and plenty of reasons that could argue it a place in your living room.

But next to similarly priced rivals, such as the aforementioned Q Acoustics Q7000i and Focal Dome 5.1 (now down £500 to £1000), it doesn't quite hold its own in the same way it did in its First Test in July.

In such a competitive sector of the market, things move fast – very fast. There are more dynamic, more precise packages available. And because of that, it loses a star.