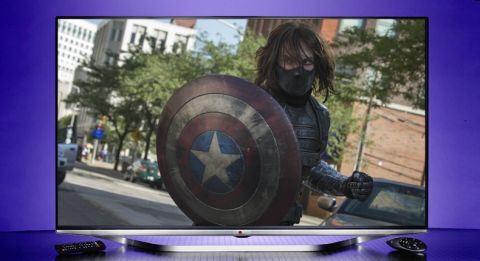 The LG 55UB950V is our first 4K TV from the company this year and it’s armed with a fancy, smart new interface, as well as all the specifications to handle 4K.

Is it too good to be true?

We’ll start with the most remarkable thing about this LG: WebOS, which made its debut in 2009 on the short-lived Palm. WebOS’s big appeal is the ability to multi-task, and its use here is a revelation.

No longer do you need to load up the ‘home’ or smart ‘hub’ to do anything. Instead, you get the Launcher. It shows everything (apps, inputs, live TV) as tiny cards, and appears as an overlay like the pop-up on Blu-ray discs.

Want to pause BBC iPlayer and check something on live TV? Go for it, and the next time you click on iPlayer you will be exactly where you left off, without needing to reload.

It’s an intuitive system: everything is laid out chronologically, from left-to-right.

In the centre is a large image (current choice); to the left, a list of your recently used sources, easily called back; to the right, is whatever you might use in the future.

The brightly coloured tiles are easily identifiable. All TVs should work like this. So the LG is great to play with, but how does it look? We switch to the Netflix app for a bit of House of Cards and the picture is exceedingly sharp.

The LG makes a strong case for 4K, with its 8-million pixels doing a great job with details and textures.

There’s a thin bezel around the screen, and the simple metallic stand is attractive. Around the back are four HDMI 2.0 inputs, three USBs and LAN.

LG’s Magic Remote (above) has gyroscopic sensors, which control an on-screen pointer in the same way you use a mouse.

If that’s not for you, though, there’s the option of a traditional black wand.

It’s not a particularly subtle set, however. Colours are bold and punchy, but at times it could be more nuanced in the gradation and shading of contours – which helps with the illusion of depth.

The difference is more noticeable when we load some colourful stock footage, some of which has (it seems) been tuned for retinal damage. Then there are black levels, which are rarely deep and dark.

The panel struggles with contrast, and images can appear washed out. It’s not serious with lighter images, but in a dark scene (there are quite a few in our 4K clip of Elysium), the shortcoming is apparent.

Activating local dimming helps. We turned the backlight level to just over halfway, and put local dimming on low – this made the black levels more palatable, and improved contrast.

Full HD pictures make good use of the LGs superb clarity and sharpness. Our Blu-rays are upscaled with little picture noise, and lines are clean. 3D is of the passive variety, and comes with comfy, metal-framed glasses.

The LG’s punchy colours really help here: it’s a bright, vibrant image. Standard def is much like the other resolutions, though, with typically more noise and less clarity.

LG bucks the trend of poor-sounding flatscreens here. Voices are clear without being harsh. There’s detail, and weight too. What you get is a full-bodied sound, direct and cohesive.

The LG 55UB950V isn’t without its flaws, but we like it. The picture isn’t class-leading, but its WebOS interface is.

And if you’re after a bold, attractive picture and a great user experience, this is well worth checking out.