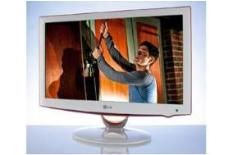 The looks, the price-tag and (mostly) the performance of a premium product

LG has taken the opportunity to make a small TV look cute without appearing frivolous. The 22LU5000 is curvy, multicoloured and sports an attractive, jewel-like stand.

It's not all whimsy, though: a 1920 x 1080 resolution and a brace of HDMI inputs mean the LG's equipped to see second-room service from any source(s), and it benefits from excellent on-screen menus as well as logical remote control.

The LG does good work with dark scenes and with motion too, though very complex patterns (a fetching plaid shirt as worn by a grimacing zombie, for example) can provoke shimmering.

Detail is good, although the picture is softened, slightly, and the 'LU5000 can't deal with movement with the same authority as with HD material.

But that's to be expected. And with digital TV broadcasts, the LG's picture is detailed and vivid, with deep black tones and quite impressive edge definition. And when playing games, there's no discernible 'button lag'.

The sound is reasonable by the standards of the class, though nothing to write home about. But, in pure picture terms, the 22LU5000 has an awful lot to recommend it.