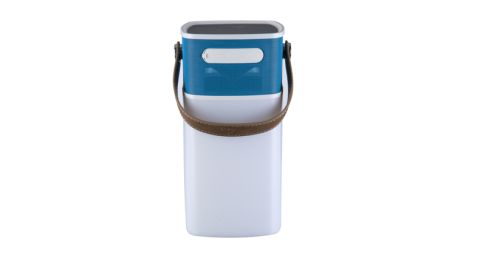 Instantly creating a product category of, well, one – that of the portable Bluetooth-equipped, ambient LED light and built-in power bank set – the team behind the Lava Brightsounds 2 must be applauded for sheer inventiveness.

The always clear and present danger, of course, of a ‘multi-capable’ device is that it results in a collection of varied, but middling skill sets.

Happily, it’s not necessary to flick through our (well thumbed) office copy of ‘Clichés for Dummies’. The Brightsounds 2 does not fall into ‘master of none’ territory. Far from it.

What we have here is a well thought-out, well executed device. Its maker markets it as the ‘perfect companion for the festival season’; we not only agree, we envisage many more uses for this portable, multi-tasker.

More about those in a bit.

Given the £40 price – that isn’t too far off a ‘contactless’ purchase for goodness sake – design and build pleases. This is one tough cookie.

The hardened polymer shell feels reassuringly robust and the Brightsounds 2 rates at IPX4 for water resistance.

This effectively means the unit ‘protects from splashing water, no matter the direction’. Which subsequently translates as ‘a splash of water here and there won’t kill it’.

See, its potential uses are already extending from camping, back home to indoor pursuits – Bluetooth speaker with mood lighting for bath-soundtrack duties, anyone?

The coloured ‘wrap’ you see towards the top of the chassis is the loudspeaker grille, and the neat leather handle tops off a smart-looking unit.

A little rubber flap hides – and, in the event of water splashes, protects – the mains port, as well as a USB slot to charge the likes of smartphones and tablets.

There is also a 3.5mm aux-in for retro, and very possibly heavily-bearded sorts who persist on porting musical devices devoid of Bluetooth connectivity.

And let’s not forget, once its internal Lithium-ion battery is juiced via the mains, the Lava model acts as a portable power bank enabling on-the-fly charging of phones and tablets.

Calling this function a ‘potential lifesaver’ may be somewhat tabloid-ish behaviour, but there’s no denying it could come in darn handy.

Before we get carried away with this compelling mix of cuteness, genuinely useful features, and approachable price, let’s make one thing clear: this is not the world’s best-sounding £40 Bluetooth speaker.

Sure, the design enables lots of acreage for the LED light, but the resulting lamp chomps into the available space in which to house the speaker system.

The accompanying audio system, complete with its 5W amplification, delivers pleasing sound, but we advise buyers with no need for the Lava’s ‘extracurricular’ features to check out the sonically superior Jam Heavy Metal.

Stick with it, though, and the Lava rewards with a well-balanced sound.

Bass reach and muscle, while modest, is in keeping with the system’s overall dynamics and at even higher volumes the Brightsounds 2 maintains its composure.

Feed it some Leonard Cohen and it delivers a decent helping of the prowling menace, which accompanies his You Want It Darker.

This song, the title track from the late dark master’s final work, also demonstrates the Lava’s ability to uncover reasonable levels of detail.

You can identify vocals, percussion, and keyboards, but Cohen’s track also exposes a hint of hardness in the upper mid, and top end.

That percussion has a slight, but noticeable, sharp edge to it. This sonic character isn’t going to spoil your day, though.

And if the trade-off is being able to use the unit’s LED light to help you close the zip of your billowing tent during a torrential downpour, it’s a deal worth making.

The ‘I’m making a deal’ mind-set is the best way to approach this offering.

So, don’t expect £40 worth of audio performance, instead embrace a cute – dare we say loveable – bit of kit, one which will play your tunes nicely and at the same time deliver an adjustable LED light to illuminate your darker moments, be they in a windswept tent, or in a bubble-laden bath.

It’ll also revive your dead smartphone and, according to its maker, will give you up to 36 hours of portable music and lighting.

Last but not least the Brightsounds 2 screams ‘birthday present’ – kids are gonna love this thing. It’s a Bluetooth speaker. It’s a device charger. It’s a nightlight. And it costs just £40.

Lava’s done a good job here. Not everyone wants their portable Bluetooth speaker to also be an ambient lamp and a power bank, but for those that do, the Brightsounds 2 receives our recommendation.