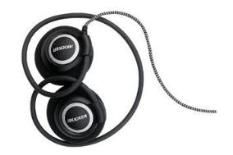 Lots to admire here but, sadly, not that much where sound is concerned

Taken from their packaging, the Kicker HP-301s don't look like they're going to fit a grown-up head, but the thin, bendy headband proves plenty long enough for even the fatheaded among us.

It doesn't exert much pressure on the earpieces themselves, though, which can feel as if they're resting uncertainly on the ears.

But they stay secure, and the extreme springiness of the band means they fold up very small when they're not in use.

Lack of sonic organisation
In use, though, they don't stand out from the herd. Field Music's You Can Decide sounds insubstantial, with a top-end clatter that doesn't compensate for a lack of low-end body.

There are better-sounding alternatives for similar money.

See all our five-star headphone reviews