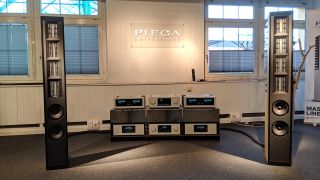 If you’re asking someone to spend €200,000 on a pair of speakers, you have to make something a bit special. Piega believes that, with their meticulously made ribbon tweeters and aluminium cabinets, its speakers are set apart from the high-end crowd.

What Hi-Fi? visited the company’s HQ, located in Horgen on the banks of Lake Zurich, to see how it makes its ribbon speakers and get a sneak peek at the Swiss company’s new Premium Wireless speaker system.

Piega was founded in 1986 by two friends, Kurt Scheuch and Leo Greiner, with a shared passion for sound. It was the archetypal garage business, spawned from a desire to build something better than they could buy. Fast forward some 30 years and the company remains a family business, run by Alexander and Manuel Greiner, sons of Leo.

The original founders came at the project from two different angles. While Scheuch was obsessed with sound quality, Greiner was all about eye-catching designs. Piega has continued to carry those two key elements with it as it breaks new ground in the 21st century.

Piega believes aluminium cabinets and baffles, though expensive, deliver better results. “We were the first company that started with aluminium cabinets,” says Marco Ballabio, head of ribbon production at Piega. “In the beginning, all the high-end people, they said it sounds cold,” he says. “It took a few years, but they realised how good it sounded. If a wooden cabinet sounds ‘warm’ that’s not good. It’s vibrations from the cabinet and you can’t control those properly.”

Sure enough, these cabinets – cut from one piece of aluminium around 6mm to 8mm thick and heavily damped – are stiff, as a simple tap of the structure demonstrates. They’re expensive but worth it, say the team at Piega. “To get a wooden cabinet this stiff would be very hard and just as expensive.”

While the cabinets are merely assembled here, Piega manufactures the tweeters on site. It doesn’t have the monopoly on ribbon tweeters, which have been around since the 1960s, but it certainly makes a claim to being one of the first speaker manufacturers to bring the designs to consumers. As Ballabio says, the founders of the company played their part in the early days of ribbon-driver development.

Unable to find a cost-effective, or indeed effective, way of constructing their driver idea in Switzerland, Scheuch and Greiner took the idea to Philips in the Netherlands. After initial scepticism, Philips eventually pioneered the idea of dust-etching a speaker coil on a sheet of foil. It wasn’t easy or cheap, and required new and expensive micro-precision equipment, but the seeds of Piega’s ribbon tweeter designs had been sown.

Fast forward to today, and while this HQ in Horgen isn’t the only Piega facility in Switzerland, it is where the fiddly business of the company’s high-end ribbon tweeters is taken care of, and where those aluminium speakers with sky-high price tags are assembled.

Ballabio has been Piega’s head of ribbon production for more than 20 years, taking charge of a team of two, including himself (“like a marriage”), tasked with the manufacture of the ribbon tweeters by hand, with intricate attention to detail.

We are shown through a component-packed space over two floors, which is bursting with cabinets, drivers and part-made speakers in various stages of life. It’s also where any returns are handled, including for other brands, such as Cambridge and Marantz, that Piega distributes in Switzerland; there is AV kit at every turn.

The corner room, where the ribbon tweeters are put together, is an oasis of relative calm. Life begins as a super-lightweight leaf of etched titanium voice coil. Replacing a dome tweeter on a conventional speaker is this 0.012g aluminium propathene sliver covered in a 0.007g foil supporting material.

The etched coil is joined to this surface, resulting in a speaker coil that is also the speaker membrane, looking a little like a featherweight circuit board. This makes for a light design which, partnered with a strong push-pull magnet system, creates an efficient, high-performance driver.

“Pleating” wire is soldered into place, dividing the tweeter into many small areas to stiffen the surface. After this, the tinfoil-like, fledgling driver is placed into a press and given just enough pressure to flatten the pleating – years of experience, passed down by his father, who also worked at Piega, comes into play here.

The frame, which will attach to the cabinet, is glued to the driver, before the unit is clamped flat and left for 24 hours. Excess foil on the frame is trimmed, the back and front supporting plates are applied, before the magnets are moved into place, bringing an applied pressure of more than 100kg.

Tweeters and midrange drivers are wired up before the speaker is ready to be mounted within the cabinet. The experienced pros at Piega can get through around 14 complete drivers per day, depending on the speaker model and complexity.

What’s the end result? “Our ribbon foils are extremely light and we surround this light foil with a strong magnetic field,” says Ballabio. “The combination of powerful drive and almost no moving mass guarantees an outstanding performance compared with other products. You never see movement in the tweeter, it’s not needed. The output power is enough, and it’s efficient.”

Not only is the process itself time consuming and complex, the components along the way are built for purpose and cost accordingly. It’s not just any glue, for example; neodymium magnets require super-strength glue, and gluing just one coaxial speaker can cost up to £50 – a lot more than some complete drivers. The neodymium is expensive, too, requiring sourcing from China where preorder time is up to six months – and the growing electric-car market provides increased competition.

So it’s no wonder Piega operates at the high-end of speaker design, led by its Coax and top-of-the-range Master Line series. The former uses a square, point source tweeter design, while the latter, the flagship range, uses a vertical array of ribbon tweeters for a startling design – especially on the 165cm tall Master Line Source 3, yours for around €300,000 (pictured, top).

Back in the real world, the recently launched Premium Series speakers are the building blocks of the brand new Premium Series Wireless, fully active speakers. And, sure enough, they use one of the recent ribbon tweeter designs, of which Piega currently makes around 3000 per year. No doubt the company would be happy to ramp that up if these wireless active speakers prove a success.

At a time when physical media, and even physical connections, are replaced by digital transactions, it’s good to know ‘analogue’ processes are alive and well, and extra care taken to deliver optimum performance for those happy to pay for an audio experience that will stand the test of time. “I need to identify with the work,” says Ballabio. “This means that, when I finally listen to the music from a loudspeaker we have produced, I need to be really proud of the result and the fact that we can make such a good product."

Now that we’ve seen the work, we are looking forward to putting the new Piega Premium Wireless to the test…