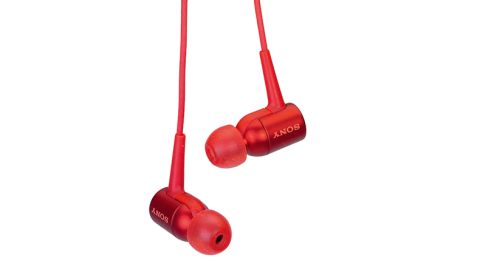 They put a wedge between your music and the noisy world, but need to sound much better

‘People who plug their keyboards into their hi-fi aren't idiots, that would be stereotyping.’ ‘The latest iPhone is a huge 6s.’ Everyone loves a good pun – or even a couple of mediocre ones – including Sony, by sound of its latest buds.

Pronounced ‘hear’ (their less puntastic model name is MDR-EX750NA), the h.ear in NCs have been released alongside the h.ear ons (on-ears) and two Walkman music players.

The common gene in this product family? With Sony running with the idea that single-colour products are easier to coordinate than two-tone ones, they all share the same distinct colourful finishes. The h.ears come in straight-up black, blue, yellow, pink and, like our sample, red.

In fact, it turns out to be more of an attack of red than the elevator scene in The Shining, from the four sizes of silicone buds and 1.5m cable to the box it comes in.

It’s a bold, attractive look, and one both our eyes and ears are fond of. The buds are long enough to bury inside your ear snugly so even a slight accidental cable tug doesn’t dislodge them, and we reckon they’re comfortable enough to last a transatlantic flight (a flight adapter joins the carry pouch in included in the box).

But the real talking point isn’t design, for these aren’t your average earbuds. With built-in noise cancelling, they aim to block out any outside racket using two tiny microphones – one outside and one inside the housing – to detect ambient noise and offset it with opposing sound waves.

Sony claims the h.ears can run to 16 hours of noise cancellation before they need a two-and-a-half-hour re-charge via the supplied microUSB cable. That plugs into a small battery box the size of a pack of gum, fixed on the cable by the 3.5mm jack and slim enough to easily slide into a trouser pocket.

Further up the cable is a universal in-line remote for hands-free calling. On one side is a switch for turning noise-cancelling on and off, on the other is a single button to answer/end calls and perform basic playback operations: press once to pause, twice to skip forward a track and thrice to skip back one.

So how is it as a sound blocker? Pretty good actually. It certainly reduces the hum in our office and is just as effective at blocking out the constant murmuring on the commuter train. Just don’t expect pure silence, or perhaps even the level of isolation you may have experienced through decent noise-cancelling on-ears.

It’s handy for calls too: voices are amplified, coming through loud and clear, and despite the in-line microphone falling at chest height, you can be heard just as well on the other end.

But sound quality is king and this is where the h.ears drop the ball.

There are positives: we like how clean and crisp the presentation is, and as we play Michael Jackson’s The Way You Make Me Feel its fast, agile character is peppered with liveliness. Keyboards bound along, vocals are clear and focused, and cymbals simmer sweetly.

While the drubbing bassline isn’t as deep or as driving as it should be, the Sonys do a good job of keeping its rhythmic structure alive.

You need no comparison to hear that they sit on the lean side of the tonal fence, but although we crave a little more weight and solidity behind mids and lows, it’s not an uncomfortable balance.

As an aside, we’d save the noise-cancelling feature for when you really need it, as the h.ear ins are a slightly subtler, more precise listen in passive mode.

The trouble is, the Sennheiser Momentum M2s (£90), which rule the roost around the £100 mark, shoot them down in flames. Although not noise-cancellers, they offer far greater insight into Seal’s soaring vocals in Kiss from a Rose, communicating its stops and starts and dynamic lifts better, and giving them more space to breathe too.

The faint accompanying instruments under the lead strings in Vivaldi’s Violin Concerto In F The Four Seasons (Autumn) Allegro are also easier to detect, while the texture of violins is unmistakable.

For compact in-ears, the Sony h.ear in NCs set their sights high: to shut out the world from you and your music.

But it’s only a mini victory, for if you can live with just a little outside noise, you can get significantly more accomplished headphones for notably less money.