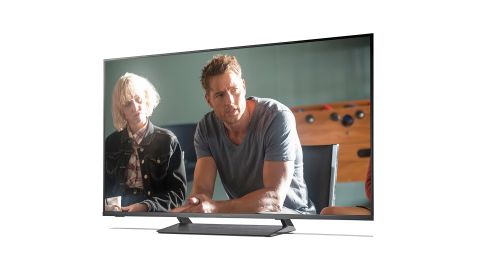 The Panasonic TX-58HX800B may be towards the bottom of the 2020 Panasonic TV range, but to consider it a low-end set would be a mistake.

On paper, it doesn’t look markedly different to last year’s equivalent TV, but that might not be a bad thing – after all, that model was named best 55-58in TV under a grand at the 2019 What Hi-Fi? Awards.

The TX-58HX800B has a similar appearance to the premium OLEDs in Panasonic's 2020 range. That’s thanks mostly to a very thin panel, made possible by the use of an edge-lit LED backlight.

Edge lighting is a tricky business – while it makes for nice, thin sets and often better energy efficiency, the outright contrast and screen uniformity can suffer. But this is not Panasonic’s first edge-lit rodeo, and without any apparent major upgrades to the picture processor or panel, refinement is the watchword here.

The TX-58HX800B is an attractive, near-black TV with a brushed metal central plinth stand, a minimal bezel and a super-thin 65mm panel. We liked the GX800's looks last year, and not enough has changed to revise that opinion now.

Look closer and there are differences, though. The stand is now deeper, sturdier and holds the panel at a more leant back angle than before. It’s handy for pointing the screen towards the eyes of the viewer when placed on a low support, but worth bearing in mind if you’re planning on positioning it on something taller.

Round the back, there are three 4K HDMI sockets, one of which supports ARC (but not eARC) and all of which offer Auto Low Latency Mode (ALLM). VRR (Variable Refresh Rate) is not supported, and that might be of concern to gamers looking to upgrade to PS5 or Xbox Series X this Christmas.

Situated close to the HDMIs are two USB 2.0 ports, an audio-out for headphones or a subwoofer, and optical out for connecting something such as a soundbar. You have a choice of ethernet or wi-fi for connecting to the internet.

Like much on the surface of this TV, Panasonic’s user-interface is more a case of evolution, not revolution. The latest version, My Home Screen 5.0, features some changes, such as content highlights as we hover over video streaming services and a pop-up version of the home screen options, but it’s still largely the same as before. It won’t be a candidate for any design awards, but it is clear and easy enough to understand.

It still employs the Freeview Play EPG and services, and there are still some missing apps, including Disney+, Google Play Movies & TV, Now TV, BT Sport and Apple TV. You could add a media streamer to plug those gaps (the Amazon Fire TV Stick 4K would work nicely), but it's a shame that that's necessary.

My Home Screen 5.0 does allow for plenty of modern features, though, including screen mirroring, Bluetooth connection and voice operation through either Amazon Alexa or Google Assistant. The remote control is exactly the same as the 2019 remote, even down to the shortcuts for Netflix and Freeview Play, and is fully-featured rather than smart and small.

The Panasonic TX-58HX800B has a brilliance with dark detail. We watch Deadpool in 4K HDR and as our anti-hero skewers a black-shirted henchman on twin katanas, each differently lit fold of the bad guy’s clothing is expertly textured.

We can see every part of the fingers of his black gloves as he hangs, impaled on the swords like a human kebab. There’s a tactile difference between the smooth leather on the palms and the rough suede on the upper. Contrasted against the worn, red stitching of Deadpool’s spandex suit, this skill with monochrome makes for a pleasing image – unless you’re the henchman, of course.

It gives this TV a very grown-up feeling which is only added to by its skilful close control of contrast. The knife hanging in the henchman’s limp left hand is expertly shaded. There’s not much to the weapon – just a few light grey scratches on a dark grey slice of metal – but this subtlety gives the knife a definite dimension and weight that separates this TV from those at the next price down.

Colour-wise there’s plenty of realism here too. Deadpool’s suit is a convincing dirty red – not too crimson and with plenty of variation. Equally, the skin of the henchman’s forearm is a genuine, though not particularly healthy, pinky-white.

Those colours falter a touch as we drop down to SDR content with Ant-man on Blu-ray. The balance is still impressive, but the richness of the tones gets a little peaky from time to time. While we’re okay with Hank Pym’s brown wool suit and his bright red tie, his lips look a little too made up and his oak-panelled study comes off a shade too orange.

Still, we can’t fault this TV’s ability in terms of upscaling. There is an excellent amount of detail and it never looks false, noisy or over-sharpened. It’s only once we get to standard definition daytime telly with Terry And Mason’s Great Food Trip that the image becomes less than lovely. Edges go soft and colours become blocks, but this is all to be expected from standard-def.

Going back to Deadpool, everything is rendered with plenty of HDR pop, including scenes with a difficult mix of light and dark. Whether it’s an underground Skee-Ball arcade spotted with highlights from fluorescent bulbs, or the daytime freeway crash, punctuated with silhouettes of wrecked cars, we never feel lost for detail in either the bright or the dingier parts of the picture. There’s a proper sense of solidity that only a deeper black production could vastly improve.

Panasonic’s edge-lit LEDs still sometimes leak a bit of light close to the edge of the frame and the whole panel could be a little better shielded from its light source. This is simply the shortcoming of mid-range, edge-lit TVs, though. The only way to get beyond that with Panasonic is to make the significant step up to the company’s OLED range. The fact that this is the only place we notice the compromise is credit to what Panasonic has done here.

We’re pleased to note that Panasonic’s motion handling is every bit as good as usual. We recommend opting for the Minimum setting in the Intelligent Frame menu, which maintains the cinematic feel while smoothing out much of the usual judder.

This Dolby Atmos-enabled TV is fitted with a pair of standard 10W speakers, but what comes out is more impressive than most. It’s no match for even an entry-level soundbar, which we would still highly recommend, but Panasonic has tuned this limited audio equipment with a sensible balance.

The most obvious negative is that there isn’t much weight to the sound. Gun blasts in the Deadpool freeway scene aren’t alarming or hard-hitting. You can toggle on the Bass Boost feature, but that’s missing the point. There are mid-range TVs that choose to champion bass, but often to the detriment of other areas of the sound.

This more modest tonal balance from Panasonic means we get detail from top to bottom as Deadpool makes the bad guys share his bullets. The tinkle of shells hitting the ground, the clicking of the gun's pin and the grunts and groans of the recipients of the pain are all there in the soundtrack.

What’s more, that clarity and precision lends a decent degree of spaciousness to the sound. The speakers do an excellent job of firing the sound out to the sides of the viewing position. With that audio nice and clear, it means that those sweeping wide effects, such as Ajax’s motorbike zipping across the carriageway, are not lost in the fog. Make sure not to position this TV too far into an alcove or there’s a danger of losing these effects.

Naturally, this audio prowess disappears when there’s a lot going on in the mix, as TV speakers such as these are far too simple and small to keep up. The only real sacrifice is that the mid-range is fairly unexciting. There’s not much depth to voices and given that dialogue is a pretty large part of most films, it’s quite noticeable and stops this TV from scoring full marks on sound.

Despite the unchanged spec sheet, Panasonic has made marked improvements to this year’s 58in X800 model. While the manufacturer hasn’t managed to solve the issue of black depth in this edge-lit TV, it has managed to improve on an already strong mid-range performance.

The UI might be looking increasingly lacklustre as new video services arrive and other TV operating systems improve, but the core work of sound production and picture quality is generally excellent for the money. It’s a treat for both 4K and Full HD content and, despite being a little more expensive than some mid-range rivals (and its predecessor), the HX800 remains an excellent performance-per-pound proposition.