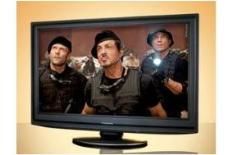 Still at the forefront of its size class, the D25 2010 Award winner is going to take some shifting. This is a stunning 32-incher

On recent form, and on past tests, this is undoubtedly the television to beat.

Not only did the D25 win our last 32in TV Supertest, but it's also our reigning What Hi-Fi? Sound and Vision Award-winner at this screen size.

Times move on quickly in TV world, though, and with new and cheaper models now out on the prowl, this Panasonic set could have its work cut out. The pressure is on.

Features still very competitive
None of the newer models here has any real advantage over the Panasonic as far as features and functionality are concerned.

The four HDMI inputs the TX-L32D25 boasts are as generous as you could expect or realistically need for a screen of this size – or larger for that matter.

Its Viera Cast abilities bring with them various sources of internet-related content including Acetrax movie-on-demand functionality and BBC iPlayer. Our review sample still didn't have this onboard, but Panasonic has recently started to roll out its version, so any set bought from now on should.

Panasonic has been generous in the tuner department, providing you with both Freeview HD and Freesat tuners. Both produce rock-solid images, though the Freesat tuner offers a marginally sharper, cleaner and more resplendent picture.

Either way, you won't be disappointed, whether you're viewing fast-paced Champions League football on ITV1 HD or bumbling Z-listers on Strictly Come Dancing on BBC HD.

Colours are handled extremely delicately and skin tones come in for special praise as they're presented in natural and believable hues.

The LED backlight does its utmost not to intrude on proceedings and there's only the slightest hint when the screen goes completely black. It's barely worth mentioning, but this is a contentious subject for many people – especially on the whathifi.com forums – so it would be remiss not to mention it.

With the bulk of the Panasonic's picture processing turned off, (apart from 24p Smooth Film), Blu-ray images appear finely honed and masterfully handled.

The claimed contrast of 2,000,000:1 seems high on paper, but there's no doubting the D25's skill with black levels and differentiating between different shades of grey.

Sound is decent by TV standards
There's the slightest trace of picture noise visible on the odd occasion, but nothing that we would classify as disturbing.

After all the praise and positives, it would be disappointing to have substandard speakers take the gloss off our final star rating.

It's with great relief then, that this Panasonic produces a perfectly inoffensive and well-behaved sound and we've no qualms about preserving the D25's hold on its much-deserved five-star rating.