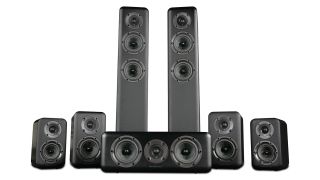 In its four-decade history, Wharfedale has more or less been defined by its budget Diamond hi-fi speaker range, which has been toyed and tinkered with over the years to keep their position among the most compelling speakers at the entry-level end of the market.

The latest iteration, the Diamond 11 Series, was launched last year, and today Wharfedale hasn’t announced a premature successor but instead an even more affordable range to sit below it.

Running concurrently with the existing Diamond 11 Series, the D300 Series feature mid/bass drivers with Wharfedale’s latest-gen woven Kevlar cones, driven by a long-throw voice coil motor system, and oversized ceramic magnets - a technology pioneered by Wharfedale in the 1960s. Additionally, the drivers are mounted in a ribbed basket designed to improve transient response.

Borrowed from the Diamond 11 Series and fine-tuned for the D300 range, Wharfedale’s WFR (wide frequency response) tweeter sits in its own ‘cabinet’ damped with fibre filling.

With the aim of controlling flux, an over-sized ceramic magnet is attached to a pole piece, which is also vented through to the rear chamber in an effort to achieve a low resonant frequency.

And while the D300 speakers don’t sport the curved cabinet sides of the Diamond 11 speakers, their cabinets have been braced, lined with absorption fibre material, and attached to 28mm-thick front baffles that have been profiled at the edges to reduce diffraction edge reflections at mid to high frequencies.