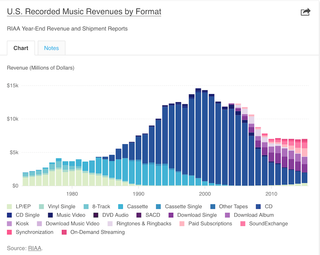 The vinyl resurgence may be nearing its end. Data shared by the Recording Industry of America (RIAA), shows sales in the US for the first half of 2016 were noticeably down on the previous year.

It seems vinyl in 2016 has been sucked into the general decline of physical media. Neither CD, LP, or EP sales have grown over 2016, with overall sales falling by 12 per cent.

This news comes after a recent ICM poll, reported by the BBC, showed that 48 per cent of people buying vinyl weren't actually playing the records, with 7 per cent of people saying they didn't even own a turntable (of course, if you know one of those people, we have some recommendations for them).

Vinyl sales earned more than streaming in 2015, while CD sales, at 123.3 million units compared to 17.4 million, still dwarfed sales of vinyl in the US last year.