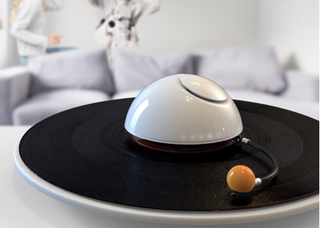 We love it when a deck doubles as a work of art even when idle – just check out the turntable slipmats in our Christmas stocking-filler gift guide.

But what if your vinyl-loving giftee really has been exceptionally good this year? Well, product designer Elham Mirzapour might have just the ticket. Meet her new creation, Saturn: a beautiful vinyl record player inspired by the planet Saturn, its rings and its biggest moon, Titan.

Saturn comprises a turntable platform subtly reminiscent of Saturn’s rings. On top is a spherical speaker (yes, that's a speaker) – or the gaseous planet's upper hemisphere. Attached to the sphere is the tonearm, featuring an orange cartridge head shell designed to represent Titan, Saturn’s biggest moon.

The movement of the stylus is meant to mirror Titan's rotation around the planet – although we're not entirely sure whether this moon (which, as we're sure you know, is larger than the planet Mercury) gets ever-closer to Saturn in its lengthy orbit.

Getting Saturn up and running is hardly rocket science. You remove the upper hemisphere (taking its tonearm and Titan with you) and place a record on the base platform. Replace the hemisphere again and position the Titan-esque needle. Press the Power button, followed by the Play button and watch as the record begins to rotate like Saturn’s rings. Titan gets into the groove and we have lift-off – er, music.

You can see more pictures of this exceptional deck at The Vinyl Factory and Yanko Design. We wish we had pricing information too, but it appears that it's all still up in the air...