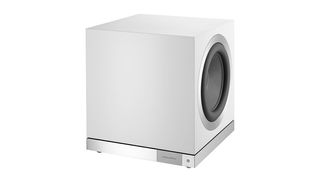 According to Bowers & Wilkins, its new range of subwoofers - the DB series - are the most powerful subs it's ever produced.

The DB1D is the largest, packing a whopping 2000W of power, while the other two boast 1000W of grunt apiece. All three have dual-opposed drive units and rigid cabinets that reduce distortion, providing deep, agile bass.

The Aerofoil cones are light, ultra-stiff transducers that resist bending or flexing for far longer than standard cones. This means they can deliver controlled bass with "outstanding precision", according to B&W.

The DB2D has the same 10in cone as the 800 D3, while the DB1D features two massive 12in drivers - B&W's largest cone ever. The smallest of the range, the DB3D, has 8in Aerofoil drivers.

The cones in all three are arranged in an opposed, balanced configuration, a design which was pioneered on the awesome PV1 subwoofer, and also featured on the follow up, the PV1D. This arrangement helps reduce cabinet vibrations, which would otherwise colour the sound.

The new digital technologies B&W has incorporated in the digital pre-amp include Dynamic EQ and Room EQ, which promise a more precise performance.

There's also a control app (iOS and Android compatible) which offers positioning guides, preset options and helps you through the set-up process, including using your smartphone's mic to calibrate the sub's sound to your room.