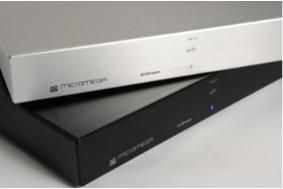 The device works seamlessly with iTunes and owners can stream music from an iPad, iPhone 4 or iPod Touch directly to a WM-10, without requiring any alteration or update.

Music can also be streamed via AirPlay to several WM-10s simultaneously to create a multiroom system.

A second Micromega component containing AirStream technology will launch in the UK at the end of the first quarter of this year.

Selling for £999, the WM-10 is based around Apple's AirPort Express wireless solution, the device is designed to stream music from a PC or Mac, along with other wireless devices such as the iPod Touch, iPhone and iPad, and not surprisingly will work seamlessly with iTunes.

Micromega has chosen the term WHiFI for its IEEE 802.11n implementation, 'in order to differentiate it from other Wi-Fi specifications, which are designed for multiple forms of data as opposed to purely audio.'

To further improve the performance of the Airport Express module, the WM-10 uses 'a sophisticated linear power supply incorporating a low-bandwidth R-CORE transformer, which acts as a natural line filter, together with a low-noise, fast- response linear regulator. This improves sound quality significantly compared to the low-cost, electrically noisy switch-mode power supply that is common to standard AirPort Express modules.'

In addition, attention has been paid to the master clock, used to synchronise the digital data. The WM-10 replaces the AirPort Express's standard oscillator with a 25,000MHz clock with its own low-noise power supply, complete with its own secondary winding on the transformer.

The company says that 'This solution ensures the main and clock power supplies are entirely separated, reducing jitter and eliminating the harsh time domain errors associated with low-quality digital decoding.'

The unit is 24-bit/192kHz-capable, and the manufacturer claims that CDs ripped without compression on a computer, then streamed to the WM-10, will actually sound better than playing the disc back directly.

'By storing music on a PC or Mac – be it downloaded from online music stores or 'ripped' from other media – and streaming it to a high-quality hi-fi system via the AirStream WM-10, it is possible to obtain the best of both worlds: the convenience of computer-based hard disk music storage and management, coupled to high- level signal purity and audiophile-quality playback.

'Furthermore, the AirStream WM-10 may negate the need for a separate radio tuner, allowing the many thousands of radio stations available via the internet to be played through a hi-fi system with the best possible sound quality.'

The Micromega AirStream WM-10 can handle AAC, AIFF, Apple Lossless, MP3, WMA and WAV files, has both analogue stereo and electrical digital outputs, and is available in black or silver.