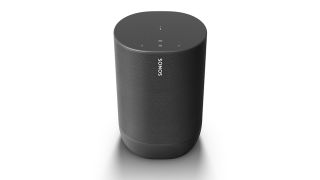 It’s official: Sonos has announced its highly anticipated, considerably leaked Sonos Move, its first-ever portable speaker. Marking Sonos’ move outside of the home, the Move is both a wi-fi speaker (like every one of the company’s speakers) and a battery-powered Bluetooth speaker.

The Move’s battery lasts 10 hours on a single charge, and Sonos confirmed the rumour that the Move charges on an included base station. A ‘Suspend’ mode, which is activated automatically when not in use or by tapping the power button, is designed to reserve the battery for up to five days.

It’s a smart speaker, too, with Google Assistant and Amazon Alexa baked allowing for voice commands over wi-fi.

While the Move may share much of the Sonos One’s design DNA, it’s has been built to survive its out-of-home adventures with a more durable exterior and IP56 rating. Sonos has also built on its Trueplay tuning technology to ensure the speaker automatically tunes itself according to its outdoor or indoor surroundings.

Double the features, double the price? Almost. The Move is priced £399 and will be available globally from 24th September. We’ve spent some time with the Move behind closed doors at Sonos’ press event in Berlin, and we have a Sonos Move hands-on review to show for it.

While not competing with Amazon for the sheer quantity of products launched during IFA, Sonos hasn’t limited today’s announcements to just one new product. The Sonos Move today shares the spotlight with two other new additions to Sonos’ catalogue, the Sonos One SL speaker and Sonos Port streaming component.

The former replaces the Play:1 in Sonos’ speaker line-up, and is supposedly identical to the Sonos One – just without built-in microphones and voice assistant support. Priced £179, the entry-level Sonos One SL will be available from 12th September.

The Port, meanwhile, is the timely successor to the Connect and similarly brings the Sonos network streaming experience (from music apps to Airlay 2 to Assistant and Alexa voice control) to any amplified audio product, such as a stereo system or a receiver. Compact enough to fit on a shelf or be tucked away in an AV rack, it includes an updated DAC over its predecessor.

The Port will launch alongside the Sonos One SL on 12th September, priced £399.

Sonos One vs Apple HomePod: Which smart speaker should you buy?