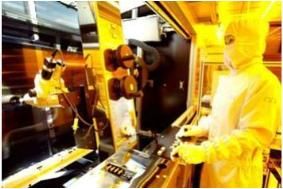 That represents a 45% increase year-on-year, and 68% of that total – over $4bn – was accounted for by panels destined for use in TVs, thanks to the football and sales of 3D sets, particularly in Europe.

But there's be no resting on its sales success for Samsung: Korean rival LG display posted a staggering 43.7% sales increase year-on-year in the same period, with sales of $5.37bn (£3.36bn).

Between them, the two account for half the worldwide market for LCD display panels.