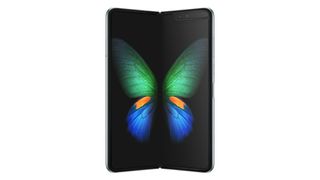 In the final hours before Apple launches its iPhone 11 series, Samsung is doing its best to ensure its imminent Galaxy Fold isn't far from people's – especially near-future phone buyer's – minds.

Earlier today, the Korean brand announced that the Fold – out in Korea now and due in other major markets later this month – can run 'hundreds' of apps specially optimised for its foldable, dual-screen form. These include Spotify, Amazon Prime Video, App in the Air, Facebook, iHeartMedia, Twitter, VSCO and – perhaps most importantly from a practical point of view – those from Microsoft. They are all available to download on the Fold from the Google Play Store and Galaxy Store.

In the past 18 months, Samsung has set up test facilities around the world to encourage developers in the Android ecosystem to ensure that their apps are sufficiently modified for the foldable experience. Google has since introduced improved re-sizing, multi-tasking and multiple-display switching features in Android 10, too.

Developers and services have had the time to develop such a fleet, of course. With the Fold facing a drastic delay to its initial slated April release after its troubling debut, we were beginning to wonder if it would make it to shelves before Christmas. It's finally arrived in Korea in the past few days, however, and availability in the UK, US and other major markets should follow in the next fortnight – perhaps on the 27th September if the tweet by credible online leak expert Evan Blass is to believed.

It's slightly disconcerting that Samsung appears to have cancelled Galaxy Fold pre-orders in the US in the past few days – "we are taking the time to rethink the entire customer experience – from purchase to unboxing, to post purchase service – so in the meantime, we have, regrettably, decided to cancel your existing pre-order," an email to a Twitter user reads. But it does at least confirm a launch in "the coming weeks", and when the handset is finally in pockets owners should at least have plenty of foldable-optimised fodder at their disposable.

iPhone 11: release date, price and leaks for the new iPhone