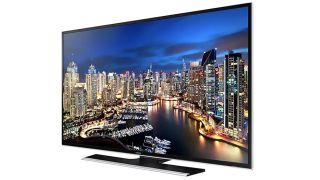 Samsung and LG are reportedly looking to get rid of major LCD panel production lines in South Korea.

The two TV giants currently hold a $33bn stake in the LCD market, but, with the overall LCD business currently valued at almost $106bn, the sale of these production plants would mark a significant shift in the TV industry away from LCD and towards other technologies, such as Quantum Dot and OLED.

Reports from South Korea claim that Samsung has already sold LCD manufacturing equipment at its Gen-8 LCD plant, in the company's South Korean Asan Campus, to a Chinese display manufacturer called Efonlong, based in Shenzhen.

The company has reportedly purchased the Asan Campus' 8.1 LCD manufacturing equipment – machines which will be shipped to China next month and installed by August. The space freed up in Asan will then be used by Samsung to produce larger Quantum Dot displays – and by large, reports suggest that the company means anything over 65 inches.

While Samsung's arrangement with Efonlong looks to be a done deal, LG is said to be currently negotiating with another Chinese company to sell LCD manufacturing equipment at the South Korean firm's P8 manufacturing line. Unlike Samsung, who plan to replace LCD-making apparatus with equipment to fashion Quantum Dot displays, LG is expected to move towards OLED manufacturing machines – an intention the firm made very clear at CES 2020 last month.

Industry watchers are also predicting that, as a direct result of the two giants trying to shift their LCD production plants, LCD prices will go up in the first half of 2020. As reported by hardware, gaming and mobile site Wccftech, analysts at Yonhap, (a South Korean state-funded news agency) believe that supply shortages will cause the price of TV-sized LCD panels to increase in the first half of this year – but it won't be permanent. As new output from China picks up in the second half of 2020, the price of LCD TVs will probably go back down again. Either way, it looks like a shift in the TV landscape is coming for manufacturers and consumers.

Read all our Samsung TV reviews

Read all our LG TV reviews