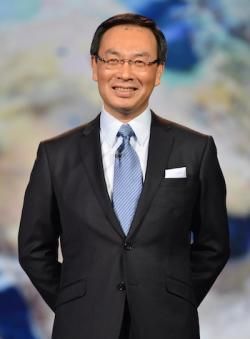 He may be staring down the barrel of huge losses for the past year, but Panasonic boss Kazuhiro Tsuga (left) is determined to turn the company around, however painful the measures required may be.

And it seems the savings start close to home: the company has just announced both Tsuga and incoming chairman Shusaku Nagae will have their salaries cut by 60%.

Tsuga restated his commitment in his most recent interview with the Japanese financial press, saying that 'For the past year, I've tried to manage the company in my own style. I'll follow through on my decisions no matter what.'

Some of that 'no matter what' was laid out in his New Midterm Management Plan, aimed at avoiding the kind of loss the company made last year – ¥772bn (£5.4bn) – and the ¥750bn+ of red ink it's expected to have when figures are released for the financial year just ended.

A major player in those losses is the company's flat-panel TV business, the interview in The Nikkei noting that ¥600bn (just over £4bn) has been invested in plasma technology over the years without yielding the results the company has been expecting.

Tsuga says that in future the company will earn money first before making such investments, perhaps suggesting it may take existing technologies and build on them before spending on further development.

Tsuga has already wielded the axe at Panasonic's corporate HQ, cutting the staffing from 7000 to just 130, and reinstated the company's old structure based on product categories rather than one rooted in business functions across product types, such as production and sales.

That gives the various product divisions of the company more ability to make their own decisions based on market conditions, but arguably also disentangles them from the larger company structure, making it easier to cut them loose if not performing.

The company is not expected to pay a dividend to its shareholders this year – the first time it will have failed to do so in 63 years, but Tsuga expects earnings to pick up, and that 'we will surely resume dividend payments this fiscal year.'

At the top of the company, Panasonic imposed cuts in directors' salaries of 10-20% in 2009, and directors have also made voluntary salary sacrifices. The newly announced cuts for Tsuga and Nagae – currently Executive Vice President, but due to succeed former President Fumio Ohtsubo as chairman in June – will take their salaries to less than half of pre-2009 levels.

Other executives will have their salaries cut by 30%, in a move expected to save the company tens of billions of yen, and negotiations are also underway with Panasonic's labour union to extend working hours for all employees without any extra remuneration.

And what of the Midterm Management Plan, which has been criticised in some quarters for being big on ambition but light on detail? Tsuga says more detail will be given following the company's 2012-13 earnings announcement, due on May 10th.