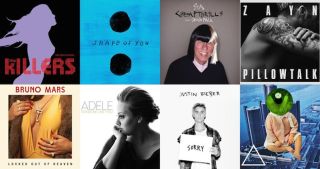 When the Official Singles Chart began including music streams for the first time in summer 2014, it marked a real sign of the times for how music consumption had changed.

Of course, nowadays streaming is one of the world's most popular (and growing) music habits. 44 billion streams have been generated in the UK in the last year compared to 98m sold singles, according to Official Charts Company data – and the latest change to the charts celebrates that.

By combining streams and sales for the first time, the Chart’s ‘million sellers club’, which comprises songs that have reached a million sales, has now grown from 169 songs to just over 300.

It uses the same rules applied to the Charts, where 150 streams equal one sale or download.

That means the likes of Ed Sheeran, Justin Beiber, and Pharell Williams are the club's newest 'Millionaires', sitting alongside Elton John, Band Aid and Queen in the top ten. Make of that what you will, music fans, but it does mean that finally we have a discernible way of identifying the most popular music artists through the ages.

Music streaming revenue up 60 per cent

3 ways to save the music streaming industry