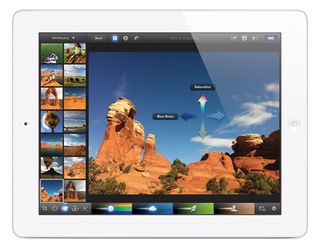 As an iPad 2 owner, I spent last night covering the 'new iPad' launch and wondering if I'd wake up this morning and feel disappointed with my purchase, especially as Apple has now cut the price of the old model.

Anyway, I've been trawling through Apple's website comparing tech specs between the old and new models (OK, I'm a geek) and now the dust has settled on last night's hoopla, the comparison makes interesting reading.

So here's a breakdown of the key differences:

A5X processor, with A5 processor

Now our intrepid News Ed Joe, who was at last night's launch and managed to get his hands on the new model (above), reckons that Retina display is a big improvement over the old one. And in America at least, 4G capability will make mobile browsing much faster.

But here in the UK we're stuck with 3G for now. And given that I've already been able to upgrade my iPad 2 (and Apple TV for that matter) to iOS 5.1, I reckon I'm not missing out on that much.

The new iPhoto for iPad app looks pretty cool, and I can download that for £2.99 which I may well do. Otherwise, my trusty 'old' iPad 2 does everything I want it to, streaming music over AirPlay, syncing with iTunes Match/iCloud, giving me one of the slickest interfaces around and 720p video which is good enough for me on something with a 9.7in screen.

Oh, and I can now delete images from my Photo Stream, which is handy.

So I won't be joining the queue at my local Apple store on March 16th. You'll have to wait for the official What Hi-Fi? Sound and Vision verdict on the new iPad (coming soon), but for now I reckon that price cut on the iPad 2 still makes it a pretty enticing proposition.

Well, Andy may not be convinced by the new Apple iPad but having had the chance to get hands-on with Apple's new baby at the UK press launch on Wednesday night, I can't help thinking he's kidding himself.

I too was underwhelmed at first as we listened to the announcement. Most people were expecting more than 'just' a better screen and a faster processor.

Yet, think how crucial those two aspects are to the iPad experience. We'll of course be bringing a full review very soon but from first impressions the quality of the screen marks a big improvement.

This won't just impact on any video you watch but on viewing web pages, playing games, enjoying apps, taking and editing pictures, reading text, eBooks and newspapers... pretty much everything we love about the iPad will in time look that much better. Sounds good, no?

And of course thanks to that quad core processor, it'll all work faster, too. Again: browsing, editing, reading, flicking, scrolling, loading, all now faster. Are you sure you're happy with your existing iPad?

It's in our – and almost certainly your – tech-addicted nature to want the latest and greatest technology, whether it be a TV, pair of speakers, AV receiver or indeed a tablet. We'll be bringing you our final verdict on the new iPad very soon but my hunch is the improvements, albeit few in number, could make all the difference.

Read all about the new iPad in our extended news story.